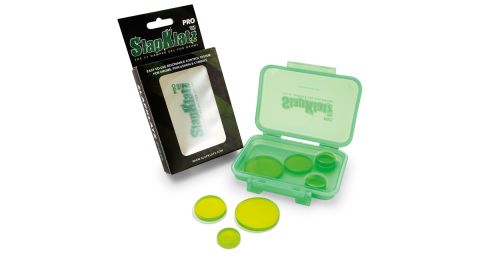 Perhaps not everyone will get excited about a pot of goo, but this package certainly contains a plethora of choices for quick and hassle-free dampening.

Until recent years, the dampening market has been more or less dominated by one product.

Since our gaffer tape was cast aside in favour of those little blue rectangles, drummers have been able to work more quickly in achieving a desired sound with minimal fuss and minimal mess. Relatively new arrival to the market SlapKlatz now brings us the new 'Pro' package.

Starting with one of the smaller 2cm  discs placed near the rim of a 14" snare drum, the sonic difference is noticeable but pleasantly subtle. This allows the effect to be applied incrementally by adding one more at a time.

The feel of the drum is barely changed at all as more gels are added, and nor does the head become choked out despite the tight tuning. Although the Pro pack comes with much larger gels, SlapKlatz recommends that the smaller ones are used, placed in opposing positions on the drum's surface.

That said, we took a shine to using one of the largest 4cm pads on a 16" floor tom and found the result to be a satisfying controlled boom. Due to the more subtle nature of the SlapKlatz gels, cymbals benefit well from the same treatment.

The gels are so sticky that you can even hide them away on the underside of the cymbal for a more subtle appearance. One or two of the smaller pads will ease some of the ring from a ride cymbal or dry up a pair of hi-hats quite nicely. Avoid the larger ones though, unless you're looking for more of a really dry, borderline electronic cymbal sound.

As to be expected, the gels were covered in general crud and stick debris within the course of a couple of gigs, although this did not stop them sticking effectively to the drum heads. The good news is, they are washable - but don't expect them to come quite back to their former glory.