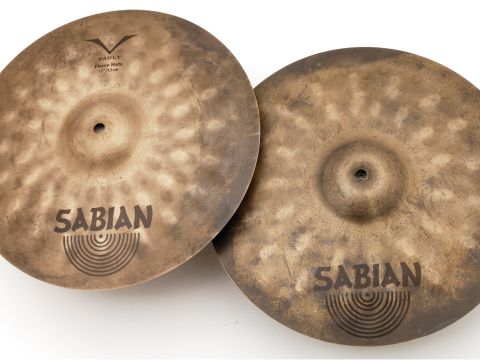 If ever a product was appropriately named, it's these Fierce Hats. They are one of the loudest pairs of 13" hi-hats we've ever encountered. Jojo Mayer's jazzy roots are reflected in their complex tonality, and the fact that such warmth can be conveyed so assertively is quite a feat. However, the unquestionable bite they possess inevitably reduces their versatility somewhat by making them overpowering in quieter or acoustic environments.

Sabian's Vault Fierce Hats were announced at the 2008 NAMM back in January, but it wasn't until the Frankfurt music show later in the year that they were unveiled. The hi-hats are the latest cymbals to emerge under the Jojo Mayer-endorsed Fierce brand, joining a ride and a set of crashes.

Though the word 'unique' is bandied around all too often, it is a term that can be used genuinely to describe Jojo Mayer. Initially cutting his teeth as a jazz sideman (backing legends such as Monty Alexander, Dizzy Gillespie and Nina Simone in the process) he is better known nowadays for his edgy electronica work - as a drummer, writer and producer - and his notoriously inspirational clinics.

Like the Fierce ride and crashes that preceded them, the hi-hats are, in essence, signature cymbals. The Vault designation is due to Sabian's new marketing policy of grouping all its signature models under the Vault banner.

Considering Jojo's playing attributes, it's no surprise to find that the hi-hats are available in a 13" diameter only. Rumour has it that Sabian and Mr Mayer are working on a pair of 10" Fierce hats, which would again make perfect sense in his territory.

Individually cast from B20 alloy, the hi-hats bear multiple deep hammer marks and are completely unlathed. Though the cymbals have been cleaned to remove surplus tin oxide, the finish could only be described as raw, with character-enhancing variations in hue spread across each of the cymbals in random patterns.

Rawness features prominently on Jojo's existing Fierce cymbals so it's safe to say that he's not the sort of player who likes to view his own reflection in his cymbals. As much as the rough-hewn finish might be interpreted as a visual metaphor stating that the Fierce line of cymbals is not a vanity project, its inclusion is more about the influence on the sound that it brings, namely a dark, intense tonality.

The hats are paired as a medium-heavy bottom and a medium-thin top, which sees them tipping the scales at nearly 2½ kilos. This density is very apparent when handling the cymbals. First impressions of the hats are of a blend of dry, complex tones and an aggressive presence. Sticking is reproduced precisely, especially fast patterns played with the tips, and is projected with no little force. Playing into the hats further results in a dramatic increase in volume.

We found that the harder we played the louder they got. The warm, slightly trashy tone remains throughout all the dynamic levels, but the overriding characteristic of the hats is sheer power. In a word: ferocious.