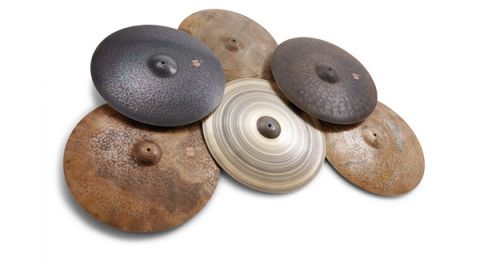 Don't be misled by the jokey name and bizarre finishes. Sabian has produced a stunning and intriguing set of high-end, provocative, challenging, complex, dark and great-to-play cymbals.

They're certainly big. But ugly? I think that refers to the generally dark and often mottled appearance, rather than their sound. These 10 rides are grouped into four familiar series - the HH, HHX, AA and XS20, and Sabian says they share the characteristics of being "big, dark, loose and dynamic - but most importantly, huge fun to play".

Fun they may be, but these are also top-notch, expensive cymbals, especially the six HH and single HHX examples. Manufacturing these B20 instruments is complicated and the HH series still involves real hand-hammering by highly-trained specialists at the Canadian Meductic factory.

It's evident from the varied hammering and lathing, weights and bell profiles, that each cymbal type is unique. But it's the finishes that grab you first. We expect our drums to have imaginative looks so why not our cymbals?

The AA Apollo is one extreme with a chalky surface, square pin hammering and coloured squiggles. The HH Novas are thinnish platters with leopard-spot hammering both sides and unusually bulbous bells. Beneath there's a squared yellowish grid where some chemical treatment has been applied. We've not seen the like of that before!

The HH Kings and HHX Phoenix have dark brown, almost black finishes on top, lathed to a traditional bronze underneath, excepting the bells.

Sabian says drummers are "actively looking for new sounds, and more often than not these new sounds are old sounds with modern characteristics". Let's start with the 22" and 24" HH Kings, which Sabian reckons may be the most complex of the collection, and we found the most adaptable.

Quite thin and wobbly, they have a fabulously clean and 'clicky-ticky' stick tip response, yet generous body. The 22" slightly edges it for versatility, but stick clarity is even more pronounced on the 24". Both have readily resonant bells - good ringers with no dead spots. Obvious jazz-blues-r'n'b cymbals, but bright enough for more adventurous rock and indie too.

The HH Pandoras and HH Novas are classic, stylish jazz rides, being darker than the Kings. While the 22" Pandora is dry, the 22" Nova is especially dry, with a full trashy tone which drops off abruptly. The winner in the dustbin lid stakes.

The 24" version has conspicuously more spread. Dinking away on their rounded anvil-like bells, the Novas are challenging, abrupt, dark - out there.

The 22" Pandora is a lovely cymbal - warm and deep with loads of in-your-face presence. Awash with tone and range, it whooshes admirably when you crash-ride it. The 24" works slightly less well for us, maybe just a bit too dark. Both Pandoras' low profile bells are strikingly musical.

By comparison we found the 22" and 24" AA Apollos a little thinner-toned and tinnier with a shriller, spreadier and ringier wash. Brighter than the previous two, these are versatile rides with a modern slant. In this case we preferred the 24" which could suit power rock as well as jazz and big band.

Additionally, all these cymbals have a great 'splang' factor: that corruscating sound you get when you half crash with the flat of the stick shoulder on the area close to the bell.

Indeed there are so many colours you can get from them, aided by their sheer size. Most will find the 22" variants sufficient, while the 24" versions may feel a bit unwieldy at first. But they are hugely tempting, delivering even more extreme helpings in a similar vein.

Here we must single out the 22" XS20 Monarch as the exception to the collection. XS20 is Sabian's budget B20 range and as such not quite as refined as the top ranges. And that is true of the Monarch.

It has a perfectly usable ride sound, but different from the others here, with that faintly metallic zing which some cheaper cymbals have. At half the price of the HH's it seems you get what you pay for. Terrific stick response again though.

Last, the 22" Phoenix is from Sabian's HHX series, a modern take on the classic HH, with more cut. It's a tight, hard sound, closer to the AA Apollo than the HH's, but with a darker, tougher attack. Electro-prog- goth anyone?!