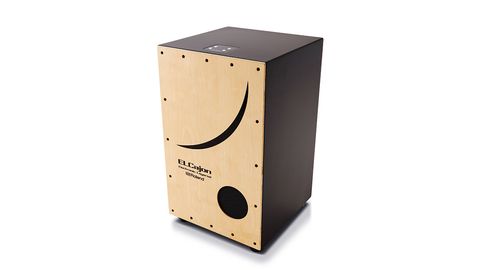 This opens up a whole new musical dimension and cajon experience. It represents a truly exciting development of an instrument - a rarity these days.

Love or loathe them, the meteoric rise of the percussion sensation that is the cajon is not to be sniffed at.

With the buzzword 'hybrid' on the lips of many, Roland has taken the lead and created an electro-acoustic 'hybrid' cajon - a unique concept which, until now, would have seemed as likely as an electronic conversion of a penny whistle.

Cast your eyes over the black finish shell for a moment - it may appear like any we see in the myriad of bars and acoustic cafés. This is no ordinary cajon but is mightily pimped-up. Though playable like any acoustic model, the box comes fully-loaded with electronic sounds including diverse percussion, sound effects and even cajon samples too!

Construction is fairly conventional; a basic rectangular box made from MDF and a contrasting tapa in light Sapele veneer. However, behind the grained façade are hidden sensors of the type found in Roland's electronic drums. One is located just below the front edge, triggering sounds set as 'edge', the other approximately a third of the way down and designated 'head'.

Considering its Spanish/Peruvian origins, in a tongue-in-cheek way Roland has named its latest piece of e-wizardry the EC-10EL Cajon. 'El' means 'the one' in Spanish, however the prefix in this case stands for Electronic Layering. This is where the electronically produced sounds are mixed or 'layered' with the natural voice of the cajon.

The EC-10 may be either mains powered (via the supplied PSU), or run under batteries, making it ideal for buskers. The 60 velocity-sensitive sounds are divided up into three groups, Cajon, Percussion and SFX, each one easily selectable during performance via the top panel of the cajon shell.

Located at the upper/rear portion of the cajon is a cunningly adapted handle from a Roland amplifier. This has a dual purpose of handle and sound hole. It features a recess at one end for your hand, and to the other (on the inside of the cajon), there is a cut-out to allow the acoustic sound to emanate. Also around the back but a little lower down, we find the mains input, battery casing, mix-in (for user MP3 or CD player), electronic sound output jack, volume and trigger balance between 'head' and 'edge'.

Before touching the power button, we can't resist a play in a natural acoustic state - with just a few taps in and around the usual sweet spots, this cajon shows immediate promise. Towards the top we have a nice crisp slap and only a few centimetres down, a sound which is full and meaty. Also, there is an unusually effective underlying snare rattle which really does enhance the cajon.

Now, switching on a cajon - how weird does that seem? Well, it certainly takes a little getting used to, but on it goes and the LED segment illuminates to show a single-character numeric display. Sat in the driving seat the display/control panel is plenty large enough to give a clear view of the display and is easily accessible.

Firstly, we try a few of the electronic cajon sounds, blending nicely with the acoustic side of the instrument. The fat-sounding bass cajon reverb on the 'head' gives a surprisingly effective sound reinforcement. When playing lower frequency samples such as Vintage, Cajon Foot, Dubstep and a range of other useful sounds it literally transforms the way you play.

The blending or layering is really superb - perfectly in sync and with zero latency. Also, not forgetting, those electronic sounds can be output directly into an amp/PA and the box can be miked up just like any acoustic model - the potential is enormous.

The selection of complimentary sounds is highly playable. Perhaps the only one that could be deemed a touch gimmicky is the 'Voice Yeah' which could quickly grind you down. However, there is a mix of electronic and acoustic samples such as the Afro Stomp and Ambient snare that transform the instrument.

We expect most users will take advantage of the actual cajon samples. This may appear to be a daft thing to suggest, but think of it as a way of reinforcing the natural acoustic instrument.

One of our initial concerns was, would the internal electronics effect the natural acoustic properties? Would it be able to resonate with the reduction in the volume of the enclosure? Fortunately, this doesn't appear to be the case. Overall we are treated to a powerful cajon sound which is also enhanced by the electronics - awesome.