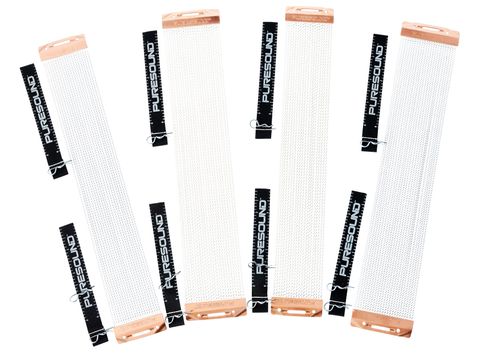 Puresound's innovations with the Custom Pro range have made the drummer's life incrementally easier. The Speed Release Strap means head changes (and even wire changes) can be made swiftly, without having to fiddle with the strainer for ages afterwards. The Anti-Choke plates reduce buzz, and allow for a greater dynamic range, and the choice of brass and steel wires means there's something to suit all tastes. You've never had it so good!

Puresound was at the vanguard of the after-market snare wire revolution, its Vintage custom wires the answer to every retro-head's call for replacement parts, and its Custom and Blaster ranges supplanted the generic steelies on many drums. Now Puresound has enlisted the help of boffin Bob Gatzen to further develop its product range.

We were sent four sets of the new Puresound Custom Pro snares - a 20 and 24 strand set made from Puresound's premium-grade steel alloy wire coil, and the same from its new brass wire coil. The wires are soldered into the copper-coloured end-plates, which are drilled to allow the use of either straps or cord.

In a departure from previous models, the corners of the end-plates are bent down, to bring them below the level of the wires. This is one of Puresound and Gatzen's innovations - called the 'Anti-Choke' end-plate, they are designed to reduce snare buzz and increase the range of wire tension, to allow the player to crank up their wires without them choking.

Puresound also includes its new 'Speed Release Strap' which uses a cotter pin to allow for quick wire removal without having to undo the strainer and butt-end.

Installing the Custom Pro wires is a doddle, and if you want to change the resonant head in a hurry, simply slip the cotter pin out from each strap and take the wires off. You can even swap wires between songs.

The steel wires speak with a crisp, authoritative tone, perhaps slightly muted initially compared with the generic rattly steelies, but the dynamic range available is much wider and the Anti-Choke plates do much to isolate the snares from the resonant frequencies that cause snare buzz.

The 24-strand wires give a more 'chattery' sound - there's more 'snare' and less drum than with the 20-stranders, and they allow a more sensitive touch to be heard.

The brass wires are brighter and warmer than the steel - a more open sound that is higher-pitched and with less decay - ideal for those of us who like a snare to be wide open. The steel wires were more controlled, but equally as responsive.