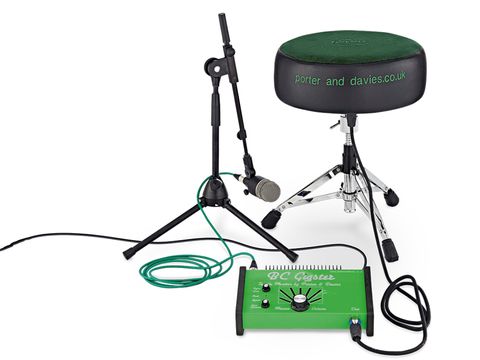 The BC Gigster is a welcome addition from Porter and Davies. It's built to the same standard as the BC2, is identical in performance terms while carrying a smaller price tag.

Since its launch a year ago, Porter and Davies' BC2 monitoring system has become a worldwide success. A cheaper and simpler alternative to the BC2 is now available in the shape of the BC Gigster.

The principle behind both systems is tactile monitoring, which turns the sound of the bass drum into silent vibrations that are felt. Like the BC2, the BC Gigster is made up of an engine unit and a throne top.

Where the BC2 is built to withstand the rigours of touring, the Gigster has been designed for a less stressful life. Out goes the heavy-duty flightcasing found on the BC2's engine; instead the Gigster's brain is housed in a livid green steel box with thick rubber grommets at each end.

BC2 features, such as separate mic and line input controls, a voltage selector and provision of phantom power, have been omitted from the Gigster to cut costs. These aside, the innards are identical and the throne-top contains the same BC2 transducer that has intimately connected so many drummers with their bass drums.

Setting up the Gigster involves plugging a mic or line out into the input socket and connecting the throne to the engine unit with the supplied Speakon cable. Then it's simply a matter of setting the Input Gain and Low Contour levels before turning the Master Volume up until you can feel the bass drum.

Tactile monitoring is not supposed to be painful; it's a far more subtle sensation. With the signal adjusted optimally the vibration seems to arrive as a sound. This is due to the pulse travelling up the spinal column straight to the cochlea (inner ear).

As with the BC2, the Gigster is incredibly responsive and accurate, mirroring bass drum tunings and level of dampening, along with any shifts in dynamics. It also operates in real time, with no catch-up from the stroke being played to the throne's reaction. Using it with an electronic kit makes an even bigger impact. The entire kit can be fed into the throne, bringing it to life and creating the sort of feel normally associated with acoustic drums.