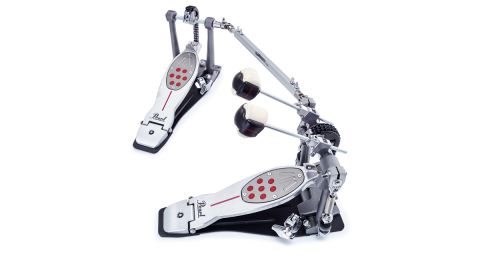 Arguably one of the best pedals on the mass market, Pearl's engineers have considered every single aspect in order to make the Redline customisable to a frankly ludicrous level.

Pearl's famous Eliminator pedals have become a popular choice among professional and amateur drummer alike in the 15-plus years since their inception.

This popularity can be put down to their trusted reliability and the sheer scope of customisation available. The new Eliminator Redline aims to take this to the next level.

Aesthetically, the pedal doesn't stray far from the previous versions.

The footboard and heel plate are finished with a brushed steel while the proprietary customisable grip plate is a darker grey. The removable and interchangeable rubber disks in the grip plate are now red instead of black which matches the gratuitous go-faster stripe down the centre.

Other original Eliminator features include the patented interchangeable cams (the pedal comes with four but two others are available) and the 'Powershifter' function which allows the entire footboard to be moved up and down on the base. Shiny new additions include Control Core Quad beaters (two felt sides and two plastic), Click-Lock Spring Adjustment and NiNja precision axle bearings.

The latter are established skateboard bearings, already used in Pearl's flagship Demon Drive pedals. According to Pearl, this new functionality allows the Redline to perform 85 percent better than its predecessor in velocity testing.

The Redline is available as a chain or belt-drive option, both as single or double versions with conversion kits also available. For review we have taken receipt of the chain-driven double model.

Despite the almost infinite scope for customisation, the Redline performed well straight out of the box.

Readily equipped with the 'linear' round cam (black), the pedals felt solid and responsive in a medium-tight spring tension. Quickly exchanged for the 'radical progressive' red cam, the amount of energy needed for a convincing stroke was greatly reduced. Great for speedy doubles.

With so many set-up options available it can take a long while to work your way through each variation and choose a preference. With almost every component movable or changeable they can easily contradict each other.

The bottom line is though, for those willing to tinker away the hours finding their perfect set-up, there really is a pedal for everyone in the Pearl Eliminator Redline.