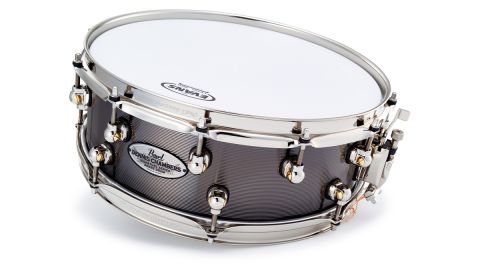 Unique characteristics make this drum stand out from the crowd, much like the man who inspired it.

To honour the legendary sticksman that is Mr Dennis Chambers, Pearl has released a brand new signature snare model which it has unofficially dubbed 'The Funkus Maximus'.

Having performed with everyone from Parliament/Funkadelic to Santana and Mike Stern over the years, one thing's for sure, Chambers' dynamic control and awesome tone have always been a fundamental part of his playing. So, might we be able to tap into Dennis' style with his new signature snare?

The 14"x5" black nickel drum is made from cast aluminium which features ribbed-like grooves on its outside surface, designed to control tone (and also to look like the grooves of a record). The majority of the shell is 3mm thick, although its outer edges are 5mm, acting similarly to reinforcement rings more commonly found on wooden drums.

There are fairly large scallops taken from the bottom edge, giving the drum a rather large snare bed. The drum comes complete with Pearl's SN20I 20-strand brass snare wires, while the hoops are the mighty 2.3mm SuperHoop II.

The snare has 20 single STL lugs which not only look amazing with their mixture of silver and gold colouring, but also cleverly allow the stainless steel tuning rod to rotate freely which is supposed to "accommodate better tuning, more control and less friction".

Having had the good fortune to hold onto this drum for a while and test it in a number of different scenarios, the general consensus is that this is a loud one!

Cranked up nice and tight (naturally), rimshots create an almighty snap that cuts through a mix like a hot knife through butter; helped in no small degree by the large SuperHoops.

Despite this, the drum is sensitive too. Not only does it boast a large dynamic range (to be used responsibly),  but also a fair tuning range. We found the drum to be most at home in higher tunings, but it's also surprisingly versatile lower down the range.