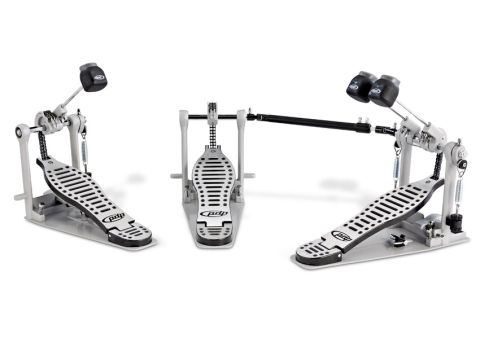 Less esoteric than their DW cousins, the PDPs are nevertheless super-solid workhorses that answer every question reasonably asked of them. Which makes them very easy to recommend as a first step into serious pedal power…

It's hard to believe that DW's value-conscious offspring Pacific Drums And Percussion has been around for a decade. It seems but five minutes since the brand launched its excellent, affordable gear to the world at large, but here we are 10 years in with no sign of PDP resting on its laurels.

While the company benefits greatly from the halo effect of living beneath the DW umbrella, PDP has never been a me-too outfit, instead delivering consistently high-performing, good-looking gear for those with a slim wallet.

"The double chain-drive is coupled to an offset cam for an assertive, if not super-aggressive, response, and the various bearings are silky smooth and silent operation."

The new 500 Series pedals reviewed here represent the top of PDP's range right now and are a striking pair, clearly designed to maintain the brand's stock with the discerning drum fraternity.

PDP describes the 500 Series (the SP500 single and DP502 double) foot boards as 'racing inspired'. The lines-and-dots aesthetic is certainly reminiscent of race pedals, but it serves a purpose here.

Each of these is concave, providing a kind of inverse ridged effect that increases friction between foot and board to boost control. It looks good too, as does the light grey finish applied to baseplate and frame.

The frame sports a matt finish, which adds to the impression that the 500s are built to withstand the usual abuse - scuffing and chipping aren't likely to be an issue here.

The 3mm steel baseplate provides a great foundation for the pedal as a whole - the underside is equipped with three generous friction-boosting material strips that look like Velcro but aren't. It's the ideal solution for minimising slippage on mats without attracting hair and dust like Velcro does.

The baseplate also features a drum-key holder for handy storage of the key necessary for the hoop clamp; integrated clamps with their own wingnuts are less fiddly, but as far as corners to be cut are concerned this isn't a bad decision on PDP's part.

Although there's nothing esoteric about the 500 and 502's build, there's little evidence of compromise where the rest of the construction is concerned. The double chain-drive is coupled to an offset cam for an assertive, if not super-aggressive, response, and all the various bearings are silky smooth and silent in operation.

One slightly puzzling feature is the double-headed beater ball, which offers a choice between 'very hard' and 'actually still quite hard' playing surfaces, depending on which way the head is rotated. A choice of plastic and felt would widen the tonal range available, but it's easily swappable.

With the build quality and general design of both the SP500 and DP502 stacking up so well, it's no surprise to find that they perform beautifully in anger. The set-up straight from the box delivers a firm response, with a snappy spring return balanced by perfect beater angle.

These 'factory settings' suited us well, but it's an easy task to dial in less spring tension, etc should you want to.

Equally easy to achieve is the feeling that the unit is locked down nice and solid. The standard of machining is such that a decisively wielded drum key quickly secures the hoop clamp or driveshaft to avoid anything working itself loose. And the 502 double pedal offers a rewardingly 'connected' playing response.

With some higher-end pedals allowing the choice of very pronounced cam profiles these days, more subtle pedals like the 500s present less to talk about in terms of outlandish attack times and so on. But the performance of the cams here is perfectly suited to most players.

Sure, if tested alongside flagship models with ultra-aggressive cams in a death metal situation one might notice a difference, but in isolation these acquit themselves just fine.

Distinctively-styled and well built, these pedals are shining examples of affordable gear that punches above its weight. True, there are no technological leaps forward, no reinventing of the wheel, but these pedals do exactly what they should, with some flair. And that's entirely respectable at this level.