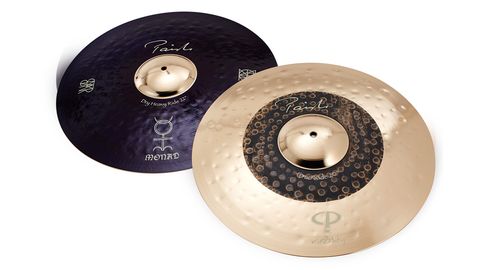 These are top quality hand-made cymbals. Relatively dry and heavy, they suit bright and powerful music.

Carl's ride has a dual main surface area. It's based on the original Signature Dry Dark ride, which features large halo-like hammering over a raw black finish, the result of intense heat treatment. But the bell and outer area of the top side are lathed down into Paiste's Reflector finish. The intriguing look is completed by Carl's personal emblem.

Danny Carey has been playing a traditional Signature Dry Heavy ride since 1990. Starting from this base, his signature model has a lathed bell, again in Reflector finish, while the rest of the surface is coated in translucent purple using Paiste's ColorSound process, decorated by three intertwined metaphysical symbols.

Both being heavy, the Duo and the Monad rides have vivid, pronounced stick responses. Both are also relatively dry, but the smaller 20" Duo is perhaps more versatile.

The Duo's outer Reflector surface has a softer and more malleable feel, while the inner black surface is harder and ting-ier.

The wash that builds up as you ride has a higher, more zinging tone. It's still controlled, as the overall vibe of the cymbal is quite dry, but it adds a depth and complexity to the tone that would otherwise be missing.

Go to the dark inner zone if you want a precise cutting ride, then for a broader, deeper, more complex tone - though still with a clean initial stick touch - go more towards the outer zone. The weightiness of the cymbal results in a dry, piercing bell, disconnected from the body of the cymbal, the Reflector finish giving it transparency.

This is a complex cymbal and although quite dry and controlled, there is an almost woody overall timbre, a warmth that belies the sharpness.

At 22" the Monad is bigger, definitely deeper, though not necessarily more aggressive. Responding to a heavier stick with a thicker bead, there is a tough dry angle to the beat, quite metallic but with the darker undercurrent always present.

We tried it on a classic rock gig and it effortlessly did the business, always strong and well-defined, the bell cutting through the loud guitar. Although heavy you can get a splanging crash if you work it hard enough. And even when things got really tasty and we ended up crash-riding it, it produced plenty enough meat to propel the band.