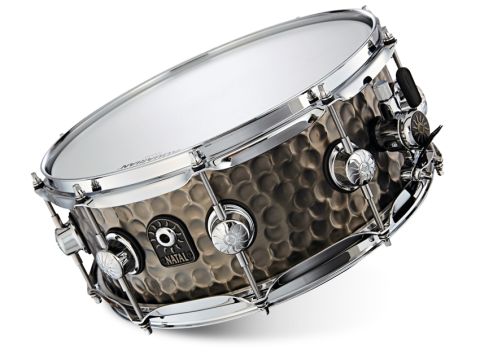 Natal's good-looking steel snare has six hand-hammered finishes to choose from. The sheer bravado of the design and attention to detail bode well. It's onwards and upwards for Natal.

Following the impressive debut of the full Natal kit, we now have a selection of handsome steel shelled snare drums.

Although we have three drums they are all basically the same, the only difference being the finishes. We were sent Chrome, Nickel and Dark Copper (pictured), but you can also choose from Dark Bronze, Copper and Old Bronze.

All three of the snares sent for review are 14x5½-inch, but aside from the aforementioned choice of finishes, Natal also offers the snares in 13x5½-inch, 12x5½-inch and 10x5½-inch versions.

The drums' shells are 1mm gauge steel, hand-hammered in a honeycomb pattern. There is no hammering beneath the lugs, which means that the lugs seat properly flush.

Natal's sun-ray logo crops up everywhere - on the 10 double-ended, chrome-plated zinc lugs, on the throw-off and the deeply-etched badge. And all these fittings are isolated from the shells by extra-thick rubber gaskets.

We've played several gigs with these snares now and they perform brilliantly. We find that while steel has a ringing attack, it also has a characteristic dark and almost dry body sound, though not as dark as brass or bronze. This is accentuated by the relatively thin shell and the hammering, both of which deepen the tone a bit and make it more complex.

If there is any difference in sound between the three snares here then we can't hear it. They are, after all, fundamentally the same drum and the finishes are cosmetic rather than sonic.

The Aquarian heads sound fine, lacking a bit in edge sensitivity perhaps, but you'll no doubt change to your preferred type sooner or later. Tuning range for the snares works best from medium (dark and thick) to high (piercing and loud). The quality snare wires have a satisfying rasp so there is plenty of snarey crunch.

We're still not convinced by the three-position strainer, however. It's a lovely piece of kit, but we have not found ourselves using the extra setting. We just find one setting that is right and stick with that. You don't have to use the extra setting anyway - it works perfectly well as a straightforward on-off strainer.