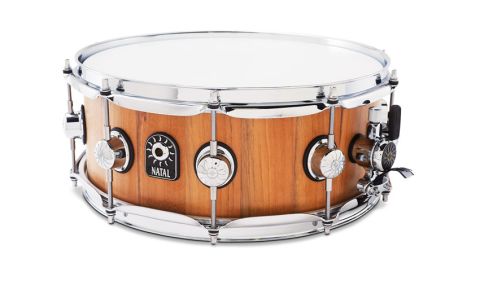 Natal's stave expertise is evident and this is a finely crafted snare that could enhance practically any player's kit.

Stave drums are constructed from a series of interlocking segments - staves - in the same manner as a barrel. This method produces thick, single-ply shells that are extremely strong and, as the grain of the wood on each stave runs vertically, highly responsive.

Usually, once the staves have been glued in place the edges are lathed away to form a smooth circular shell. Natal's Pure Stave shells are certainly round on the outside, but on the inside the individual curve of each stave has been left intact. The result closely resembles the interior of a conga shell which, of course, Natal has a solid track record of producing.

This technique is not a simple homage to Natal's percussive heritage; it also reduces the amount of glue required. Each individual stave is convex in shape with the fattest part (14mm thick) being in the centre, away from the joins at either end.

Close inspection reveals beautifully executed rounded dovetail joints linking the staves. Bearing edges are cut at 45° while the exterior finish is a simple coating of beeswax.

Pure Stave snares are currently only available in one size, 14"x51⁄2"; of the three wood choices Rhythm was sent the most expensive option - walnut - with the others being ash and maple. Considering walnut is usually associated with deeper and darker-sounding drums there is a surprising amount of attack to the snare - no doubt aided by the sheer bulk of the shell.

This sharpness is balanced by a thick note that adds body and depth. The overall sound is controlled yet still natural and responsive; it's not too dry in the centre but any ringing occurring towards the edges is harmonious rather than jarring.

With the head slackened some darkness does creep into the sound, while turning the tension rods clockwise finds the authority holding with only a hint of brittleness discernible at marching snare tuning extremes...

Considering the drum carries the extra kudos of being UK-made, its price tag remains reasonable.