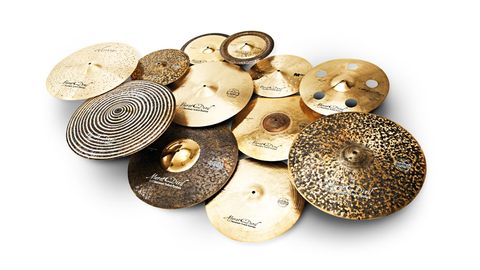 With their remarkable heritage and Murat Diril's special experience, these cymbals offer another hugely attractive alternative in what is becoming a crowded market of genuine hand-made cymbals from Turkey.

Murat Diril learned his craft working for Istanbul cymbals before linking up with Meinl in 2000 to develop their Byzance and MB20 series. Then in 2006 he worked with Paiste on its Twenty series. Thus, with 22 years' unique experience, Murat finally introduced his own cymbals.

There are 10 series and we have representatives from nine. With the idea of encouraging drummers to choose with their ears rather than their pockets, five series - Renaissance, Jazz, MDB, Speckled and Black Sea - are being marketed in the UK at the same price.

The manufacturing integrity which so impressed Meinl and Paiste is evident in the special manner of production. Many other companies use recycled copper but Murat only uses new copper free from impurities.

The cymbals are wood (not gas like others) 'cooked' in a process which involves hammering and lathing in three separate cycles. This, according to Murat, results in superior flexibility and 'linear' decay with 'no unwanted pitch changes and overtones'.

We gigged with the 20" Eleven Velvet ride and indeed it has a velvet touch, silky with a satisfying spread, a rather darker than expected body sound with good sustain. The crash is a full, broad whoosh.

Compared with the Velvet, the 21" Eleven Dizzy ride is harder, more in-your-face and louder. When you crash-ride it there's a powerful, clamorous impact. The bell, being heavier, is higher pitched than the Velvet's despite the cymbal being bigger. In fact the whole cymbal is brighter and tinnier, drier - more of an all-round rock-pop-fusion cymbal.

The Speckled 20" ride has a high-domed bell which is the highest pitched of the three. This contrasts with the body of the cymbal which is darker and slightly trashy. More of an old-K style jazz ride than the above two, and another attractive option.

For our noisier brethren, Murat offers the 20" Medium-Heavy Black Sea Mega Bell with its 61⁄2" bell, a loud dinger if you catch it near the base, not on top. The effect of the large bell spills over into the body of the ride so that while there is an exceptionally bright stick tip response there is an even brighter overtone from the bell, the presence of which is always apparent. Crash it and it's short but loud and piercing. Ideal for loud rock and metal.

All the crashes are relatively thin and fast. Starting with the Jazz 19", which we also gigged, this is high pitched for a 19" due to its quite large bell. The latter also gives the cymbal extra volume, so it's vivid and fruity with a good sustain and full tone. A versatile, use-anywhere crash. Next, the Luminous 17" Fast crash with its flatter profile has a little more of a gongy flavour, a slightly more oriental timbre, thinner and speedier to react. While being fast again, the Renaissance 16" crash has a touch more body.

There's a silvery edge followed by a higher pitched body sound which is abundant and lush. Last we have the 16" Sound Fiction Trash with five 2" holes. Funnily enough there's nothing trashy about it, the holes simply reduce the mass and although 16" in diameter the cymbal sounds like a sprightly, smooth and sparkling large splash.

As well as these crashes there's the Orbit Stack, a 12" and a 14" pair which you stack together. The 12" mini China slots over the 14" crash and when you smack it there's an explosive, clattering attack with a suitably funky, white-noise body. On its own the 14" is a remarkably swift trash-splash, while the 12" is a high-pitched China smash-trash. The 14" MDB hi-hats are soft, smooth and deep-sounding. Tasteful.

Still there's a clear stick-tip sound and when attacked half-open the tone remains smooth, full and sweet. There is nothing too harsh, marking the cymbals down overall as good for jazz and quieter rock/pop, but too soft for harsher, edgier styles.

Despite being 13" the Speckled hi-hats are relatively deep in pitch. The tip sound is soft again, but played harder with the stick shoulder, there is a fair amount of presence and dark, thick substance to the tone.