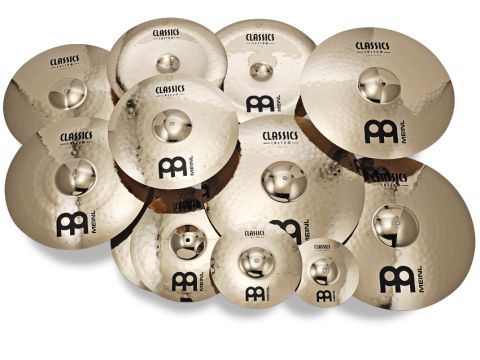 These cymbals are good, honest, clean-sounding, intermediate-priced Euro-style cymbals aimed at the more aggressive youth market. They also have plenty of character. A massive step up from your budget starter cymbals in quality and tone, a 20" ride, 18" crash and 14" hats basic set will knock you back almost £600 (RRP). But that's cheaper than, say, Paiste's Rudes and Alphas or Sabian's APXs. I didn't get the two so-called Powerful rides - they're too toppy and to our ears unpleasant, but maybe that's the idea? Three stars for them, but four stars for everything else.

Meinl's Classics cymbals have been around since 1996, a trusty Euro-style B8 bronze range for the budget-conscious. Now Meinl has upped the tin content by a couple of percent to produce the B10 bronze Classics Custom series. Meinl has also taken the buffer to the cymbals, giving them a glossy, shiny ﬁnish.

The resulting Customs are 17 percent dearer than the straight Classics and slot in at number nine of the 12 series that Meinl currently produces.

Time was when all proper cymbals were made from B20 bronze. Then Paiste introduced B8 and today Meinl and Paiste, in particular, experiment with several bronze alloys with varying tin content. Thus the Classics Customs have 10 per cent tin (B10).

Meinl makes no bones about the manufacturing style, which it describes as 'high tech computerised'. In other words, automated machine-controlled hammering and lathing, etc, which leads to a high level of consistency.

This is evident in the cymbals' appearance with totally regular ﬁne lathing on the upper surfaces and neat half-inch circular hammerings all round, though not on the bells. The cymbals are polished to a high shine and look decidedly professional. There is also a good range on offer, with a choice of 18 different cymbal sizes and types, categorised Medium or Powerful, most of which Meinl has sent along for us to try.

And what an interesting mixture they are. Let's start with the crashes, since these are the least controversial. We loved them. Clean, responsive, effective, attractive tone. The 16" and 18" Mediums feel surprisingly almost like thin crashes, they are so fast to react and you can crash them with your stick tip. The 16" is an incendiary delight, almost trashy.

The 18" and 20" Powerful crashes are brighter, but equally explosive with more body. The 20" is a little more complex with some wavering aftertones, and both it and the 18" could easily be used as crash-rides, extending their versatility to less heavy players. All the crashes have good projection and sustain.

Complementing the crashes there are three splashes: 8", 10" and 12". The 8" is too small for anything more than a short, high-pitched dink. The 10" has considerably more substance - a proper splash with modest sustain and a pleasing note.

Rides are complex and good ones should be subtle. These two aren't. They are fairly heavyweight, but they sound tinny and thin. There is a sharp stick response but no great depth.

They do open up if you pile in with a heavy stickand big tip - which we suppose is the idea. And the strident pitch probably does help to cut through. But we're not fully convinced - the sound is simply too toppy. And the bell on the 22" is lumpen. Dead.

We're being hard here, but we've encountered so-called HM rides before that don't fully deliver. We preferred riding on the 20" Powerful crash and it had a much livelier bell too. As did the 20" Medium ride, which is the best of the three rides for us. (And it makes a great crash too.)

We felt the hi-hats were also a little muted when closed. The 14" Mediums sounded quite soft, deep and not particularly loud. Open them up a half-inch though and there is plenty of power. Played hard with the stick shoulder they become meaty, much brighter without being nasty.

The 15" Mediums are different. Playing them closed we had to be careful about the amount of weight on the left foot as we were getting some strange high whines and peculiar overtones. Like the 22" Powerful ride, it seems these hats are best played hard, using jumbo sticks. Open them up again and swish them about, then you get a full-bodied and deep, driving beat.

Finally we have the two chinas, a 16" and 18", which are altogether a different surprise. Far from being brash and honky, as we were expecting, in fact they were two of the smoothest chinas we've heard. There's the usual china-style attack, but with the cymbals' gently upturned edges the sound is not the usual coarse, abrasive assault, but a warmer, slinkier style of trash.