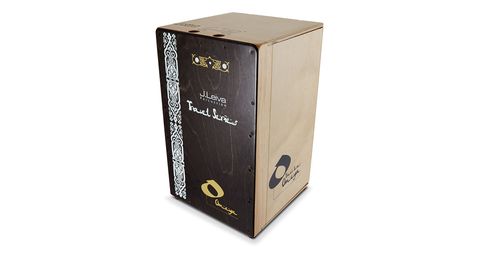 This Travel Series Omeya cajon takes portability to the next level and in doing so, doesn't appear to have its sound compromised.

This Omeya Travel Series cajon hails from the same family of Spanish-made instruments as other Omeya models including the Evo, Junior, Bass Pro and the Studio Bass, reviewed last year.

Today's review model shares similar features to the Studio Bass (including removable/closable sound ports and the materials used for construction), except this cajon has been cunningly designed to quickly fold up and pack neatly away into its own supplied carry case.

Once folded, it's slimmed down to roughly a quarter of the depth of a standard model, making it incredibly portable.

The front plate/tapa and two sides are fixed to a basic rectangular-frame chassis. The hinged sides are machined in specific areas, removing three of the seven ply layers. In principal, this should help the instrument to resonate while the areas left untouched by the router maintain stability and integrity.

In typical cajon fashion, wires (guitar strings), are pressed loosely against the front plate by Velcro strips. The Direct Tuning System is a rather fancy name referring the ability to alter the snare effect wire tension without special tools. This is performed via winged bolts (recessed into the top of the cajon), using the fingers instead of faffing about with Allen keys, drum key etc.

No tools are necessary for putting together the cajon - long bolts stretching from the back to the front of the cajon pull each of the closely machine parts together creating virtually seamless edges.

Like the Bass Studio, it has additional sound holes - one at the rear, as on any standard model, and another in the base. This system is designed to provide a little extra bottom end - either one of the ports can be opened, by undoing two winged bolts, or closed to suit the performance and performer.

Identifying each piece and transforming them into a recognisable cajon doesn't take more than a few minutes - like making up a toddler's wooden toy, this is literally child's play.

With the hinged sections opened up, the top and bottom pieces are fully inserted until they butt snugly against the front frame. The back slots into position over the precisely machined sides and are held in place by the five bolts which are each finger-tightened.

With the cover of the rear sound port removed, the cajon is capable, producing a range of drum-like and percussion-ish sounds but slightly lacking in the bottom-end department.

With the cajon sat elevated by the four supplied bolts and the lower sound port removed, there is a noticeable difference in the lower frequencies. We've found that the tapa is not the only playable surface - there are some interesting percussive sounds available down either side too.

While the effect of DTS adjustment of snare wires is nominal, the sound overall is good, especially considering most of the parts are simply bolted and slotted together.