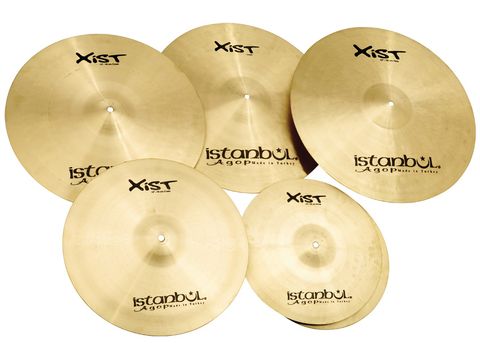 Whatever Istanbul Agop is doing to save time and money during the manufacturing process, the end product still performs convincingly.

By combining modern production methods with more time-honoured techniques, Istanbul Agop is able to make its new Xist range substantially cheaper than its usual cymbals. Unveiled at NAMM', the pricing, look and even naming of the cymbals is obviously intended to appeal to younger and/or non-jazz drummers.

Xist cymbals differ in this respect through what Istanbul refers to as pre-form casting. The company is unwilling to elaborate on exactly what this entails, other than stating that Xist cymbals require around 3000 less hammer blows to create. From the information supplied, it can only be deduced that the alloy - tin-rich B20 - is poured into cymbal-shaped moulds, with the resulting blanks requiring a mere 1500 blows to finish.

Currently the Xist range consists of five crashes, two rides and a single pair of hi-hats. Each model of cymbal is available in either a traditional lathed or buffed brilliant finish.

The selection of Xists up for review are made up of a pair of 14" hi-hats, 16", 18" and 19" crashes and a 20" ride. All of the cymbals bore the lathed finish. The hi-hats, 16" crash and 20" ride are offered as a set, which also includes a free 18" crash and gig bag. Small hammer marks are visible below the fine lathing bands that cover the cymbals.

First impressions were that none of the Xists would have any problems projecting. The hi-hats were warm and full-toned but had a clear edge to them. Played quietly, they sounded rich and musical; taken up a few levels of velocity their top end came to the fore, slicing deftly through in playing situations. The pair of even-diameter crashes blended together perfectly, opening brightly, swelling boldly and decaying harmoniously.

Sitting alone was the 19" crash, which occupied a far darker corner of the crash universe and was deceptively quick for its size. Rounding things off was the 20" ride, which behaved impeccably and delivered a sweet-sounding ping over a playful wash. Sticking the bell brought forth a clean, metallic response, which was hard and suitably authoritative without being harsh.