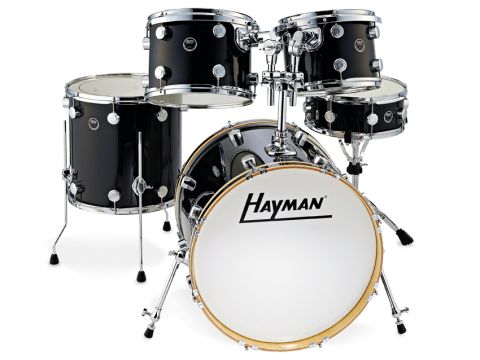 The original Hayman was a pro set, played by many of the big stars of the day. This new version is a 'semi-pro' compromise. But with its distinctive lugs, white interiors, and loud, bright sound, the kit honours the spirit of Hayman and we'd recommend anyone trading up to their first serious gigging kit to check it out.

The original Hayman, launched in 1968, was Ivor Arbiter's bid to make a British kit that was as up-to-date and effective as the all-conquering Ludwig Super Classic, the expensive American drum kit everyone wanted at the time.

We've played an original Hayman and our abiding memory is that it was loud and slightly hard and brittle sounding, particularly the snare. Move on to 2010 and Martin Costello - a successful music publisher - has launched a mid-priced version.

Martin's business partner is Keith West, a '60s rock star who is today marketing manager for Burns guitars. They have also enlisted Bob Henrit, who had close connections with the old Haymans and Ivor Arbiter, as advisor. There have been brief, sorry, attempts to resurrect Hayman before. Will this one be better? Well, the drums are made by Taye in Taiwan and that is a very good start...

Costello and West are approaching this project cautiously. At present there's just the one kit, a standard sized, 22"x18", 12"x9", 13"x10", 16"x16" and 14"x5.5" snare. The original Haymans were designed to be loud, at a time when rock was getting louder but drummers were not miked up well and struggled to be heard.

Prototypes had a metal lining which proved too heavy and Arbiter settled on a white painted interior. Ludwig already had this, but Hayman's lining was thicker. Rather than being just a basic sealant it was a thick coating which had reflective, non-absorbent properties. Accordingly, the new drums have three coats of white polyurethane sprayed smoothly inside the shells, forming a clean, plastic-looking shield.

In 1968 Hayman, like most drums, had reinforcing rings. Today reinforcing rings are an expensive option, so these new Haymans have typical modern straight-sided shells. They are made from eight plies of poplar, amounting to 7mm. Poplar is a budget birch/maple substitute, an easy wood to work with. It lacks a fancy grain, which matters not since the wood is covered up inside and out.

We were impressed by the bearing edges - the polyurethane coating extends up the inner 45-degree slope to the edge itself and the latter is smooth and flat. While the heads were off we measured up for circularity and the 12" shell was absolutely round - top marks - while the snare drum was within 2mm.

It's a lightweight snare fitted with Taye's proven SideLatch drop-away bracket-type strainer. The tension knob is a bit stiff, which may be a good thing. The butt-end has a double 90-degree bend and sticks out an inch from the shell. This pulls the snare wires up and away, so they sit better on the bottom head.

What made the original Haymans stand out was their unusual round lug boxes and striking coloured wraps. The lugs are present and correct, but it would make little sense to reproduce the wraps as they were actually domestic appliance materials and scratched easily. At present the only finish is a smart black plastic wrap, but hopefully alternatives are on the way.

The kit comes with a complete hardware package of bass and hi-hat pedals, snare stand and straight and boom cymbal stands, all double-braced. The original Hayman tom mount was like no other - a massive structure of locking pipe clamps.

The new Hayman benefits from the real advances of the past four decades. It's a double mount planted centrally on the bass drum. Atop the central post is a three-way receiver block with two holes for tom brackets and a frontal clamp for cymbal or cowbell holder. Two Pearl-style arms with ratcheted elbows are slotted into the isolation RIMS-style steel brackets supporting the toms. There are rugged memory locks at each stage.

Setting up is much easier with the new tom holder which positions and holds-fast well. The hardware is a typically solid modern set and there are some natty design flourishes.

The three floor tom legs are not set equidistantly - we assume the logic here is to make tom placement easier as equally-spaced legs always seem to get in the way. Similarly, the hi-hat has a swivelling foot board, again so you can manoeuvre it out of the way if, say, you use a double bass pedal.

The bass pedal has a powerful double chain drive with a small memory-locking nut for fixing the beater length. The single-sided hard felt beater head is cleverly adjustable so it always slaps the batter head flat on. Angle of stroke is separately adjustable. Securing the pedal to the bass drum hoop is via a grub nut, conveniently located on the side of the pedal.

Instead of the usual wing nut for securing your cymbals there is a neat little knurled nylon screw, which is much easier to handle and won't fly off and get lost so easily.

Sound-wise, the drums are certainly loud. The reflective inner polyurethane coating does its job. The fitted Pinstripes control the sound a little, making tuning easier and tempering the bright, vivacious tone with a touch of darkness. The matching wood snare has a thick, meaty and woody sound in the centre, contrasting with the healthy metallic ring of the rim shots.

It is light and has eight lugs whereas the original Hayman snare had 10. Bob Henrit brought round a prototype identical snare - except with 10 lugs - for a once-in-a-lifetime comparison. We tuned them the same and you know what? We both preferred the eight-lug version. It was definitely livelier and bustlier, less controlled. So although the eight lugs is a cost-cutting measure, the result is a spirited drum that is easier to tune.

The same seemed true of the bass drum. This has 16 lugs instead of the 20 you'd expect on a professional 22" drum. With a large drum like this you might expect the wide spacing of the lugs to be detrimental. But we're not convinced. Once more the sparser lugs seem to open up the sound, giving extra animation, resonance and depth while making tuning simpler. This bass drum is a monster.