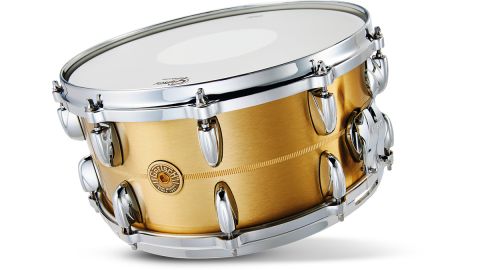 A very loud drum that is surprisingly versatile but certainly suited for heavy styles due to its ability to slice through the mix. Heavy in more ways than one.

Since Tama led the way with the first bell brass snare drum back in the '80s, they have become revered as both live and studio workhorses.

They became so successful that they can lay claim to supposedly being one of the most recorded snare drums on the market. Despite this, they are relatively uncommon; likely due to the enormous price that comes attached to them. Gretsch's latest bell brass model lives up to its reputation on all fronts.

As those of you that have come across a bell brass snare drum before will know, the word heavy barely begins to describe the sheer bulk of one. Needless to say, the Gretsch is no exception, weighing in at a monstrous 20lbs (or just over 9 kilos for the metrically minded among you). One thing's for sure, you'll want a sturdy snare stand for this one.

It is supplied with a coated Remo/Gretsch Permatone batter head and enormous 42-strand snare wires. The brass shell has a brushed appearance which is offset beautifully by the chunky chrome hardware.

So, how does it sound? Well the short answer is, loud! The drum has an amazingly wide tuning range. Starting low, the backbeat is pleasingly fat whilst keeping a surprising level of warmth to it. It manages to occupy a wide sonic space while still sounding surprisingly snappy due to the massive 42-strand wires.

In a medium tuning the natural metallic hum starts to come through but is still controlled and focused. At its highest tuning the drum is positively ear-splitting, with even the softest of ghost notes being effortlessly audible.

In a live setting, caution should be aired - this drum is an absolute beast. It is dryer than you might expect and doesn't have any uncontrollable overtones that one might expect from a metal drum. It's versatile enough to work in a number of musical styles and the drum remains balanced and responsive in any tuning.