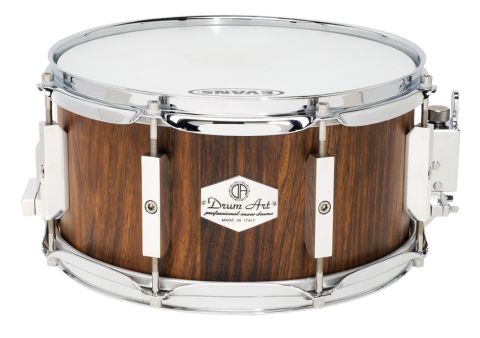 These snares have been designed by someone with a musical ear and a real affinity with wood, and they sound stunning. At this price point, nothing could be described as affordable, but they are competitive for the territory. Drum Art is a small company and recent new endorsees such as Jonathan Mover and Mel Gaynor will undoubtedly help in bringing the brand to a wider audience.

Drum Art is a company name you may be unfamiliar with. However, the exquisite, solid-shell snare drums it produces are clearly not the work of novices. The company was founded in 2004 by Silvano Biancucci and is based in Petritoli, Italy. Mr Biancucci is a master craftsman who previously worked as a percussionist.

Ideally qualified to design drums, he spent years perfecting his vision of a snare drum. After settling on a staved construction method, his first prototype found its way into the hands of a percussionist at the La Scala opera house in Milan. He was amazed at the drum and its reputation quickly spread among Italian classical percussionists.

With orders flooding in, Mr Biancucci created the Drum Art company. Drum Art remains an intimate operation, with just three other craftsmen working under Mr Biancucci. The emphasis is on producing as many of the components as possible in-house. The only drums that Drum Art makes are snares, though the company does manufacture its own range of accessories.

New snares on the block

The principal defining feature of Drum Art snares is the shells. A wide range of woods is available for shell material (some familiar, some exotic) including imbuja, olive, spruce, padouk, Mutenia walnut, maple and African rosewood. We have drums in maple, padouk and Mutenia walnut to review.

Depending on the type used, the wood is seasoned for between three and 12 years, and each piece is individually selected before being worked. The chosen wood is shaped by hand into 27mm thick staves (16-20 per drum). The staves are joined together by a slotted peg made from the same wood, then glued. The joins are incredibly neat and precise and, if you draw an imaginary line across the centre of the head, the staves are absolute mirror images of one another.

The shells feel understandably solid and Drum Art offers a lifetime guarantee on each shell. The staves are not turned to a smooth-edged circle inside the shells. Instead, a segmented circle is formed from the shallow angles where adjacent staves meet. This should not hinder the drums´ performance.

The shells slope away from the head area (the exact gradient varies according to wood used). The angle of bearing edge is also dictated by the choice of wood. Drum Art uses four different profiles of bearing edge. Visually, only the tiniest sliver of the thick shells makes contact with the head. This is to be expected, but there is an air of grace in the execution.

Two of the review drums have a Natural Matt finish, while the third sports an enamel gloss lacquer (a choice restricted to maple and spruce drums). Another option is to have a completely customised finish, at extra cost.

The lugs are Drum Art´s own models and are machined from aluminium. Their sleek, unadorned look is matched by their single fixing point to the shell. The tuning rods are also Drum Art´s and are fashioned from stainless steel. They culminate in a hex-key socket rather than a conventional square bolt. Each drum comes with its own double-ended drum key, but if you lost it at a gig you might find yourself scrabbling around for an Allen key of the correct dimensions.

Drum Art also manufactures the precise and smooth Micron Tune snare strainer and its requisite snare butt. While the snare wires are locked into the butt clamp by way of hex-key sockets, the equivalent clamp on the strainer is closed with the aid of standard square bolts. Just as well that drum key is double-headed… The only hardware that is bought in are Puresound snare wires and hoops.

Stave to the rhythm

The three drums up for review are a 14"x5" Maple Gloss, a 13"x5" Padouk and a 12"x6" Mutenia Walnut. While the 14"x5" Maple Gloss is equipped with die-cast hoops, the other two drums are fitted with standard pressed hoops.

The 14"x5" Maple Gloss gave a controlled, clean response, with virtually no overtones. The richness of the maple was crowned by a tight ‘pop´, ensuring an equal delivery of warmth and authority. Die-cast hoops influence the sound of a drum and their presence here was undoubtedly a factor in the drum´s focus. Thick shells encourage a quick response and favour higher tunings and, as we slackened off the head, a small amount of flatness began creeping in.

This was not the case with the other two drums. Padouk is a reddish-brown hardwood. Its chief assets are its hardness, guaranteeing volume and sustain, and its smooth balance of tones. Drum Art claims it marries the warmth of wood with the entry of metal.

The characteristics of the 13"x5" Padouk snare - crisp attack coupled with a robust tone - suggested that Drum Art´s assessment was spot on. Each stroke produced a near-instant, aggressive crack which was underpinned with plenty of mid-range body. The drum´s smallish diameter marks it out as a snare for the funkier side of rock. Dialling out the tension makes it punchier and more muscular, retaining a cutting edge.

The 12"x6" Mutenia Walnut snare´s performance was as impressive as its attractive hue. Despite a diameter of 12", the drum was surprisingly full-bodied. Its depth was probably a factor, but the qualities of walnut can´t be overlooked. The hardness of the wood manifested itself in the sound, present whatever the tuning. Stick response was excellent right across the head and brushwork was indulged with enthusiasm.