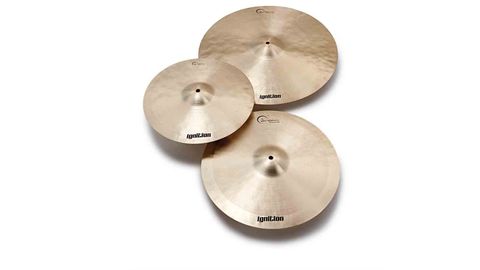 Dream cymbals have always been superb value for money but this selection represents a new high water mark. The quality of the sound on offer for the money is nothing less than sensational.

Now nearly a decade old, Dream cymbals has established itself as a producer of high-quality cymbals at near entry-level prices. Alongside its Canadian-designed, Chinese-manufactured cymbals Dream also markets possibly the most comprehensive array of gongs on the planet.

The Ignition pack is Dream's first ever off-the-shelf cymbal bundle. Consisting of a pair of 14" hi-hats, a 16" crash and a 20" ride, the set is supplied with a black padded cymbal bag.

As with all Dream cymbals each model is cast - not sheet cut - from B20 bronze before being hand hammered and lathed. Dream says that Ignition cymbals are hybrids of the company's Bliss and Contact ranges, which would suggest classic, warm voicing.

Individually, the cymbals are thin to medium thin and sport similarly-sized bells across the diameters. Fine lathing covers both sides of each cymbal with a super-fine band occupying the final few centimetres to the top edge.

Beneath the lathing the bronze has been well worked with a hammer. Far from appearing like budget cymbals these all feel like 'proper', well-finished instruments. The bag, meanwhile, will accommodate 22" cymbals, allowing for an expansion in diameter further down the line.

First to be shown sticks are the hats and we're immediately struck by how fine and silvery the note they produce is: they're balanced and full of musicality. Each stroke is reproduced accurately down to the merest detail, with accents leaping out on cue.

Introducing the shoulder of the stick finds both the note spreading and the projection rising, bringing a suitably choppy and commanding feel to rockier patterns.

Taking the dynamic level higher increases the volume further but inevitably leads to a more sloshy tonality which, although not unpleasant, seems a waste of such refinement - these hats play and sound like a pair from the top end of the price scale.

Up next is the crash, which opens with a perfect combination of brightness and depth. Underpinning the initial surge of high frequencies is a deeper note that tails into a smooth decay. It's a well-rounded crash that makes itself heard yet doesn't grate and withstands repeated listens. Like the hats, it would give many a premium brand of cymbal a run for its money.

Moving onto the 20" ride the standard doesn't falter; if anything, it gets better. The ride's stick sound is clean and distinct and is complemented by a buzz of rich wash. It's a cymbal that demands to be played into and responds with waves of tonal colour and complexity. Crashing it brings these characteristics momentarily to centre stage before receding again to a darker hue. The bell concentrates these qualities further, chiming sweetly amidst pinging overtones.