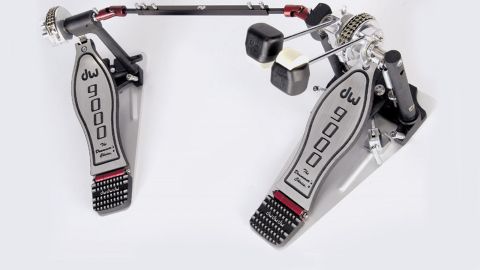 A lifetime's service is pretty good going in our book, and that is almost certainly what these pedals will deliver.

Pretty much every major drum manufacturer has a range of hardware to be proud of these days. With competition as fierce as it is and technological advancement allowing for high performance at low prices, there simply isn't room for poor pedals in today's market.

But there's one company whose metalwork is held in particularly high regard, and has been for some years, despite the various drum advances elsewhere. Drum Workshop not only craft some of the finest shells around, but also produce hardware - bass pedals and hi hats especially - to match the exemplary standards of their woodwork skills.

The 5000 Series is something of an institution, with the line's pedals appearing attached to many a non-DW bass drum, but now it's time for the new 9000 range to take the limelight.

The two sexy (and they are sexy - for humble drum hardware at any rate) pieces we have here are the new double chain 9000 pedal and its double pedal counterpart, the 9002. Footplates are silver rather than DW's trademark black with silver logo, as are baseplates, and the black frames are immensely chunky without being clumsy.

Perhaps the most significant factor in the construction quality of the pedals is the use of a 'floating rotor' rather than one fixed to a drive shaft as in conventional pedals. The rotor (that's the bit that the double chain is attached to) thus spins smoothly and noiselessly around the drive shaft (the metal bar between the two upright posts), which itself is free to spin - the goal is a super-slick, sophisticated feeling assembly.

Another major factor in ensuring ultra responsiveness in these pedals is the location of the tension springs. Instead of being positioned at the end of the drive shaft, DW has moved the spring to the inside of the frame, closer to the centre of the unit. The aim here is to maintain "the vertical alignment of the moving parts", according to company blurb and, in theory at least, it makes sense.

Elsewhere, the drive set-up, and as such the whole feel of the pedals, can be tailored with a nifty torque adjustment arrangement. Whereas certain other manufacturers allow for such tweakage with interchangeable cams, DW goes for a hex bolt and slide bar combo that enables the user to set the rotor up for 'Accelerator' or 'Turbo' operation.

In fact, there are any number of in-between settings - all you do is slacken off a bolt underneath the rotor and slide the bar which holds it in place backwards or forwards.

This in turn moves the front face of the rotor, well, backwards or forwards - in the fore position (Accelerator) the motion is eccentric - much like this writer's bass drum playing as it happens - as you move the bar back the chain sits flush with the rotor and you arrive at a concentric (Turbo) setting.

The Accelerator option effectively shortens the length of the stroke and is suited to demanding gigs where speed and control are of paramount importance. Turbo is for those that favour a direct relationship between the footplate and beater and where power and consistency are necessary.

And if that weren't enough, DW offer a Pedal Customising Kit with footboard weights and stacker heels with which to adjust the response of the 9000s even further. A nine-position Elevator Heel Plate arrangement is arrived at through the use of three different-sized heel sections that can be used in conjunction with one another - the higher the stack, the greater the control.

So, how do they handle? Well, quite frankly, they're a joy to use. These pedals offer wonderful responsiveness and a grace and elegance that is pretty much unbeatable. Both pedals are rock solid in operation and give the impression that they are working with you.

Like the best musical equipment, after a short period they almost disappear - we're not going to gush further and describe the feeling as like the pedals 'become part of you', or any of that tosh, but you get our drift. The blend of workhorse and thoroughbred is pretty inspiring though, we can tell you.