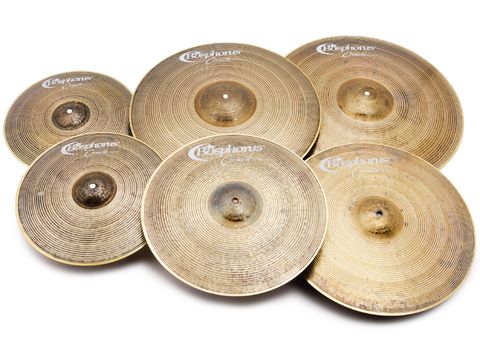 A signature range in all but name, the Oracle Series is a set of individual-sounding cymbals full of character and depth. Though the series has been designed for a jazz drummer there is a degree of versatility to most of the models. In the same way that genres meet and crossover, so these cymbals could find a home in some musical situations other than jazz.

The Oracle Series is a new high-end range from Turkish cymbal-makers Bosphorus which is marketed alongside the company's Vintage Master and Artists Series. Launched in early 2010, the range consists of a pair of 14" hi-hats, two crashes (16" and 18") and two rides (20" and 22").

Although his name does not actually feature on the cymbals, the Oracle Series was designed to jazz drummer Ralph Peterson's specifications.

While it's probably fair to say that Ralph Peterson is not a household name, in the jazz world he is regarded as a serious player. Mentored by the great Art Blakey, he played alongside him in The Jazz Messengers Big Band right up until Blakey's death in 1990.

Peterson was also personally requested to dep for Elvin Jones at a Blue Note celebration concert. As well as being involved in various musical projects he is a professor in percussion at the prestigious Berklee College of Music. Oracle Series cymbals are visually reminiscent of Bosphorus's existing New Orleans range, which was the starting point for the new series.

Ralph had a clear idea of what he required and several prototypes were made before the final designs were settled on. The cymbals are all thin (the largest example in this selection, the 22" ride, is a slender 2.2kg) but feel pretty stiff.

Individually cast, each cymbal is dotted with hammer marks from the centre hole to the outer edge. Lathing is minimal, consisting of a single scrolling spiral that works its way from the bottom of the bell to the edge, leaving a raw patina between the groove's passage.

The bells sit fairly proud on the hi-hats and crashes and are conspicuously large on the rides - almost disproportionately so on the 20" model. At Ralph's request, a single 13mm-wide hole has been drilled into the bottom hi-hat.

First impressions of the hi-hats are of a warm, dry and controlled response centred around a clean metallic note. Capable of being moderately loud, they nonetheless have a good presence, especially at the quieter end of the dynamic scale. Stepping produces a low, soft-edged 'chick' which is perfect for discreetly pulsing out time while leading on the ride cymbal.

Playing into the hats reveals a firmer and more aggressive sound, and riding them half-open results in a bright, rolling wash. Tonally, they are on the darker side but are not so dark as to restrict their versatility. They would make a good pair of all-round hats for a variety of styles.

Of the two crashes, the 16" model is the closest to a regular crash. It opens with a bright shimmer that continues well into the fade. Under the brightness is a warm note - for a small diameter crash it's really quite deep and dark. The bright and dark facets of the sound merge harmoniously in the decay.

The 18" crash is a different beast altogether. Far deeper and darker, its opening brightness is unmistakably trashy. Hitting it produces a china-like 'pah' and the decay is super-quick, even though the cymbal carries on vibrating.

Lined up together, the two crashes share obvious traits and characteristics, yet the contrast between them is sizeable. The two rides here could qualify as crash/ rides as they both open for crashing at the slightest provocation. They share a similar blend of smoky darkness augmented by brighter overtones.

While the stick sound is tight and fairly dry, on both cymbals it is surrounded by a bustling wash. The wash doesn't threaten to cut loose but it is a large component of the rides' sound.

Variations abound across the prodigious bells, depending on how and where they are hit. We experimented with a selection of wooden-tipped sticks that brought different results. Pointed acorn-shaped tips gave a surprisingly delicate response, at times almost hollow-sounding unless the side of the tip was engaged. Round-tipped sticks were more forthcoming, eliciting a strong peal from both bells.

Altering the angle of attack and landing position across the bells teased further nuances out of the cymbals. One thing we didn't need to attempt many times was shouldering any type of stick onto the bells…