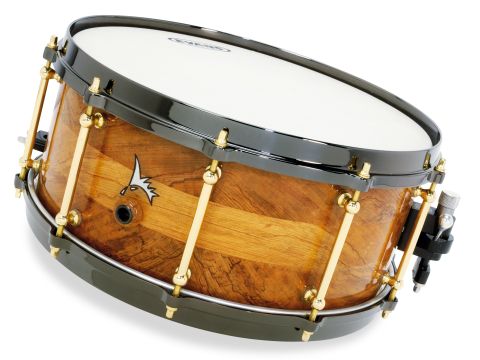 On the evidence of these three drums, Beat Head deserves to be rubbing shoulders with some of the more illustrious names in drum manufacturing. Every detail is spot on, right down to the hand-made air hole surround. What makes these drums even more remarkable is the fact that they are the work of one man - you can't get more custom-made than this.

The UK perception of Swedish manufacturing is inevitably dominated by the lifestyle furnishings giant Ikea, famous for its cheap, stylish and easily constructed furniture. Beat Head drums, also from Sweden, is about as far from the ubiquitous ﬂat-packs as it is possible to get.

The company is run by Matt Vickers and is based in Vattholma. From his workshop Matt makes each Beat Head drum from start to ﬁnish, with the only other employee of the company being Matt's wife.

Matt only builds snare drums, each of which takes around three months to complete. The majority of this time is accounted for by the drying, curing and resting of the wood in between various stages of manufacture. However, all of the physical work in creating the drums is applied through Matt's hands, with a wood turner being the only machine used.

The three snares reviewed here are from (currently) the only range made by Beat Head, the Exotic Wood series. They are a 10"x6" New Zealand rimu drum with a glossy ﬁnish, a similarly glossy 14"x6" rimu drum and a 14"x6½" oak/mahogany drum with maple hoops in natural ﬁnish.

Matt is planning on introducing a less expensive range of drums, called the Road King series (in which he will ﬁnish and dress off-the-shelf shells) but that is still in the pipeline. For the time being, all Beat Head drums are made the same way.

Matt begins by cutting circular rings from the raw planks of wood. The pieces are shaped further and then layered in overlapping semi-circular segments to form a basic shell shape. They are glued and clamped and left to rest before a ﬁrst 'rough cut' on the wood turner. After another period of resting they revisit the wood turner for another cut, and then what Matt describes as 'the real work' begins: the sanding and ﬁnishing.

The shell sections that contain the bearing edges are thicker than the rest of the shell and so resemble reinforcing rings. Matt cuts the bearing edges at either 30 or 35 degrees, depending mainly on the desired sound, but also taking into account the shell dimensions and the type of wood used. The 14" oak/ mahogany drum has 30-degree bearing edges while the two rimu drums are both cut at 35 degrees. The edges are all cut in the classic rounded style and are flawlessly executed.

Though the name of the series implies that only exotic woods are used, it does feature a wide range, from drum staples such as birch, maple, mahogany and oak through to the more exclusive likes of kauri, rimu, jarrah, padouk and purple heart. However, a choice of only two ﬁnishes - glossy or natural - is available, as Matt believes the beauty of the wood deserves to be emphasised.

The ﬁnished shells are ﬁtted with sleek tube lugs, which can be ordered in chrome, smoked chrome, gold or brass. A similarly wide choice of hoops is offered, including the maple examples found on the oak/mahogany drum. Trick snare throw-offs feature on all three review drums, though Dunnett models are also available.

We began with the 14"x6½" oak/mahogany drum with maple hoops, which looked an appetising prospect. It didn't disappoint, delivering a throaty, woody crack with enthusiasm. Little effort was required in coaxing a big sound from it, and a tap with a 7A stick brought forth what sounded more like a clubbing from a 2B.

Backbeats acquired unmistakable authority while snare-based fills slammed through the mix with vigour. It was most capable in the area between mid-tensions and the higher tunings but performed well through all stages of tunings.

The pair of rimu drums combined a naturally softer-sounding wood with sharper angled bearing edges and (in the case of the 14" drum) die-cast hoops. The 14" drum was a particularly sweet sounding snare, giving excellent attack balanced by a warm tone. The Trick snare throw-off added subtle dimensions to the drum's sound with its three positions of snare wire tensioning - the looser settings accentuating the feel and warmth of the wood, with the tighter option giving a cleaner response.

The 10" rimu drum possessed the same qualities as its bigger counterpart but operated in a higher frequency range. Far from being a token accent snare, it gave the performance of a fully-fledged, highly responsive snare drum that just happened to be more diminutive.