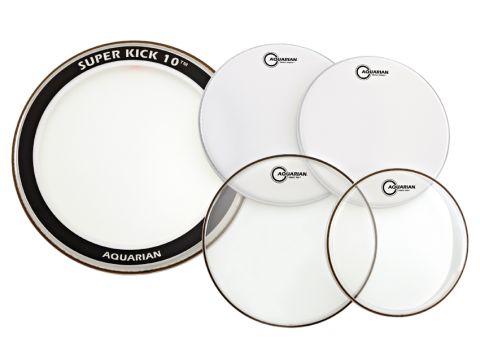 These are amongst the thickest kit heads ever made and appear capable of soaking up hours of punishing playing.

Aquarian was jointly founded by Roy Burns, a professional jazz drummer with an enviable list of secondary careers including teacher, clinician, columnist and author to boot.

"At higher tunings, ghost strokes and buzz rolls come straight back up with each prompt of the sticks."

While all of the Power Trio heads feature a minimum of two plies, the Triple Threat snare head lays claim to being the world's first three-ply head. Seeking to maximise durability while still keeping the head as sensitive as possible, Aquarian has devised a triple 7-mil ply sandwich.

The proprietary vacuum process ensures all three layers are clasped seamlessly to the aluminium hoop. Nothing about the Triple Threat examples sent for review suggest anything out of the ordinary, however - they resemble regular coated heads.

Aquarian's Super-Kick bass drum heads were one of the first - and remain one of the best - pre-dampened low frequency-enhancing heads that are now so ubiquitous. The Super-Kick 10 is the thickest model yet and consists of two 10-mil plies (as opposed to two 7-mil plies on the standard Super-Kick Double Ply version) along with a permanently attached felt muffle ring mounted on the shell side of the head.

In common with the other two heads that make up the Power Trio selection, Super-Kick 10 heads are made using Aquarian's improved Full Range drumhead film.

Fitting a Triple Threat to both of my metal snares (a vintage steel 14" and a more contemporary brass-shelled 13") brings surprisingly lively results. Where we expect a certain deadness and choking of tone, instead both snares ring in the normal manner.

At higher tunings, ghost strokes and buzz rolls come straight back up with each prompt of the sticks. The response is so articulate that even brushwork carries with excellent clarity.

The drums' open feel means that a customary token amount of dampening is still required in a miking situation. Bang in the centre of each drum I can discern a slightly thicker timbre to the sound (more so on the larger and older snare) but if anything it's actually an improvement.

Listening to a live recording of the 14" drum we find it delivering a mix-parting clonk with plenty of body. Lowering the tuning finds the thickness becoming more prominent, but the sensitivity still remains.

The sheer density of the pair of clear Force Tens fitted to our toms is more apparent than that of the Triple Threat, in part owing to the pitching of the drums. Tuned to a point slightly above mid-tension - not too high, but not flapping - the heads need a little dynamic coaxing to come to life.

Hit positively they assert themselves cleanly and with an aggressive edge, enabling the toms to muscle their way across the backline. When tapped the response is (unsurprisingly) drier than that of a single-ply head. After a two-hour gig the Force Tens had few marks on them (it was the same story for the other heads too) - proof of their undeniable durability.

The Super-Kick 10 is so meaty a head that simply holding it by its hoop and banging a fist into its centre brings forth a note of sorts. Attaching it to our bass drum brings about the usual Super-Kick transformation, revealing previously untapped reserves of low end. It's as though the drum's voice has broken overnight and it's suddenly speaking with a deeper voice.

Overtones are almost non-existent thanks in part to the felt ring, but also due to the weight of the head. If anything, my modest (20"x14") bass drum sounds a little swaddled in comparison to its regular single-ply head. Nonetheless bass frequencies abound and the note that emerges out front is darker and heavier than ought to seem possible.