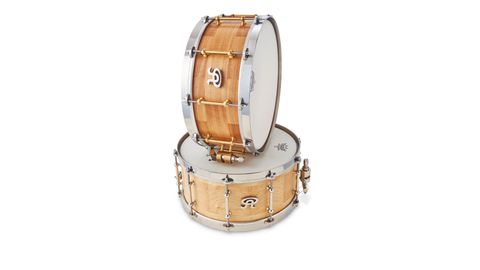 Angel Drums' custom snares marry exceptional quality with genuine innovation and flair. When one considers the amount of craftsmanship that goes into each component, the prices appear more than reasonable.

Hungary may not be the first place the typical UK drummer looks when considering purchasing a custom drum. To turn one's back on the former Eastern Bloc nation, however, is to forego the country that brought us the Rubik's Cube, the biro and the theory of thermonuclear fusion. To those accomplishments we can now add the work of Zoltan Angel, the guiding hand behind the eponymous Angel Drums. We have been sent two of Zoltan's finest snare drums to put through their paces.

Each drum exudes an understated solidity, the satin finish on the shells complementing the grain of the wood. One drum is maple, and the other the less common sapele, a wood more usually seen on high-end guitars.

Each is constructed by a hybrid segment/ stave method, with each piece of wood selected for resonance and shaped to give the best tone.

Zoltan's experience as a master furniture craftsman is evident in the fit and finish of each drum - the lugs are hand-turned by Angel from brass (chromed on the maple, left natural on the sapele) and each drum also features the almost steampunk-looking Angel throw, again machined by hand from a piece of solid bronze.

The lugs are seated using Angel's 'secret' dual-point method in order to promote shell resonance. Under each lug is a small hole, the theory being that multiple small holes will vent the pressure in the shell quicker than one single large hole. The snare beds are wide and shallow to promote the greatest articulation, and both drums use Puresound snare wires.

Crowning each drum are the unique 'Angel Hoops' - thick, single-flanged steel hoops with hand-welded 'half-moon' fixings for the tension rods. Said to eliminate overtones and widen the useable tuning range, the Angel Hoops are also available as aftermarket upgrades for your existing snares. Indeed, almost the only parts of the Angel snares not made in-house are the heads!

The finishing touch is the stylized chromed halo 'A' badge, which sits proud of the shell on two mounting lugs. Retail drums can be purchased with a custom leather snare drum case at extra cost.

The initial impression is one of heft - the Angel Hoops plus solid brass lugs and strainer suggest a solidity which could stifle the shell, and so it comes as a surprise that when struck, the initial note is so open and clear.

The hoops seem to focus the tone in the way a die-cast hoop can, but it is much less constrained with no suggestion that it is smothering the drum. The hoop forms part of the sound, imparting a slight metallic note - not at all unpleasant - that serves to underpin the woody fundamental tone of the drum.

Each snare has vent holes directly underneath the lugs to promote articulation, and so it proves - there is no feeling of the drum choking under fast sticking, and the hoops ensure that rim-shots cut through. Cross-sticking for rim-knocks produces a clear, bright 'click' that penetrates the mix - ideal for those slower numbers where the backbeat tends to get lost.

The sapele drum appears marginally darker in timbre but both respond to a wide range of tunings. With the heads cranked tight it's possible to get a Copeland-esque crack; tuned down, the drums demonstrate their versatility in a rock setting.

Each responds well to light ghost notes - when backing an unamplified jazz trio it was possible to hear the lightest of touches without overpowering the rest of the band.

The strainer proves easy to use - adjustments can be made using the lever whilst playing, or the dial on top when the snares are released. It's the work of a second to simply flick the lever and it works smoothly every time.

With the snares off, the drums provide a clear and open note - playing across the head and rim gives a convincing timbale impression.