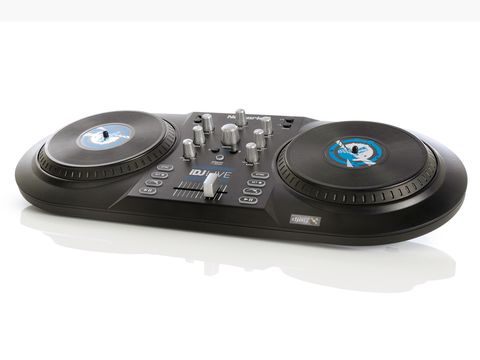 Fun, but ultimately too basic to make it an iPad DJ's solution. Perhaps a tad premature.

Apple's iOS has been treading on the toes of 'serious' music hardware manufacturers since the iPad's launch, contributing to the death of JazzMutant's Lemur and the sweat of other forward-thinking music-making specialists.

After all it's a portable, flexible and most of all affordable way to incorporate what was previously seen as a futuristic, elaborate and expensive technology.

One of the many music-based apps that strode to the top of the pile was Algoriddim's excellent Djay. Already established on OS X, Djay for iOS is a simple two-deck affair with crossfader, EQ, looping and sync options. But the portability, ease-of-use and flexible nature of the app was stunted for pros by the interface - too small for multiple functions on a single page, especially on iPod Touch and iPhone.

And there is where the iDJ Live comes in - a simple hardware controller, mimicking the basic DJ options of the app, with jog wheels, a crossfader and a two-band EQ.

The hardware is natively supported so insert the 30-pin connector, watch the Numark logo appear and fade and you're ready to roll. It's still a novelty to connect a large controller to a tiny object as is the case with the iPod Touch and iPhone.

The build is a tad worrying, as it feels hollow, light and ready to crack especially at ground zero of your local house party. The jogs, however, feel pretty good considering the price.

As for the rest of the controls, they feel flimsy and loose and even before you begin a debate about whether this is a pro or amateur product, one twist of the knobs will end it right there and then.

The biggest issue we have though is the lack of dock. The iDJ Live feeds on your precious battery to survive and drains it quite fast - it took only twenty minutes to zap half our iPhone's juice - so you're gonna want to turn off WiFi, Bluetooth, 3G, Fetch and basically anything and everything that might share power with the Numark.

All of the flaws aside, when it comes down to use, this controller is a lot of fun. We've always felt that what was holding Djay back was the lack of quick access to multiple controls and the iDJ slots right into this gap.

Browsing, setting cue points and EQing is quick and easy and it's sometimes hard to believe everything is happening within your Pad or Phone. It's a real shame there are no looping controls on the controller, though.

We also wish you could push and pull on the jogs - they are either set to 'Scratch' or 'Search'. Also, the jogs are touch-sensitive so even if you graze one, the music will stop.

It's worth re-iterating the woes that the lack of dock brings, not just for power but also for somewhere to put your iDevice. A plastic stand for iPad comes included but nothing is considered for iPhone.

The iDJ ticks the boxes for what it is, offering hands-on control of a great app. However, it's lacking too many features to make it a must-have accessory.

How long before NI - or any other DDJ manufacturer - release a pro iOS app for which their existing hardware will work natively? Not long at all, we reckon. The iDJ is simply too basic to raise the eyebrows of anyone but the true beginner.