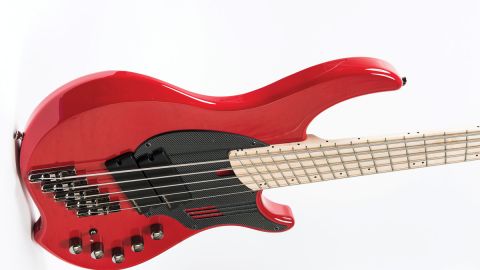 A fine instrument with an alternative flavour: Dingwall fans will love it.

Adam ‘Nolly’ Getgood of technical metallers Periphery is no slouch on the bass guitar, and when his signature Dingwall Combustion was announced, we were all keen to try one out.

Such has been the interest, it has been extremely difficult to get hold of one for review, as Dingwall’s UK distributor Bass Direct simply can’t get enough models in to fulfil the orders. You could say it has proved rather popular.

However, we can now happily report that we’ve got hold of this luscious five-string - but has it been worth the wait?

Presented in a gloss Ferrari Red finish with a carbon-fibre pickguard, the NG2’s curvaceous alder body with its chamfered top body bout and contoured rear is obviously shaped for comfort. The moment you pick this bass up, it feels instantly familiar and comfortable to wear.

Balance is good, with minimal headstock bias, and once placed on a strap, it feels like an instrument you’ve owned for years. Similar to the Combustion model, made and assembled in China with final finishing taking place in Canada, the NG2 feels like the real deal.

The three-piece maple neck covers a 34” to 37” scale length. Understandably, the low B string naturally benefits from this - but so do the other strings. The added tension and tautness gives each string an improved speaking length, which maximises the tone on offer.

Despite the wide nut width, the thin C neck profile is very accommodating, not unlike a Stingray in terms of fullness and depth: it’s a real joy to play. The 19mm string spacing works well, while the thin fanned banjo frets feel quite natural after a few playing sessions. Take it from Lee Sklar: fanned frets work just fine!

A two-over-three machine head arrangement adorns the matching headstock, while smoked chrome hardware has been used throughout: Hipshot open-gear machine heads keep the headstock weight down. Extra touches include a recessed jack socket and the easily removed magnetic plate covering the battery cavity.

The pickup placement has been modified from the Combustion model: while the pickups remain the same, a Darkglass Tone Capsule circuit has been used instead of the more familiar EMG circuit.

The control set is also affected; no longer are bass/mid/treble the EQ options but rather bass/low-mid/high-mid along with an active/passive switch and volume. A four-position pickup selector enables each pickup to be soloed, or you can deploy both pickups in parallel or series mode.

Before plugging in, this beast bounces along very nicely with a hint of mid-growl. Resonance is obviously a strong factor at Dingwall, and you’re instantly drawn to the fact that this is a truly impressive instrument with comfort and playability high on the design list.

Tuning stability is equally impressive across the whole instrument. With the EQ set flat and both pickups in parallel mode, the tone is focused, tight and punchy with a strong sustain and a good base character.

Soloing each pickup brings out the tonal character we would expect based on their placement, but the difference isn’t as distinct as it would be if there were a larger gap between their positions. Each to one’s own.

Switching over to series mode gives the midrange a boost, creating a more forthright and powerful tone. Running through each option again while adding EQ highlights a very varied tonal palette, and although there is no treble EQ, don’t begin to think that this bass will struggle with slapped passages or a reduced amount of attack.

This simply isn’t the case: the mid-EQ is very responsive, giving the bottom end a tighter response without sounding woolly or flabby, which works especially well on the low B and E strings. The high-mid control gives the tone a more vibrant response and a clear top end.

A minor negative point is that the passive option sounded quite muted, with no volume added until the control was halfway through a full turn - so the passive mode is more of a ‘get out of jail’ option should your battery die in mid-performance.

Yet again, we ask the question: how does Dingwall do it at this cost? This is a highly impressive bass for the price and it’s obvious why they have been selling like hot cakes.

Don’t be put off by the NG2’s association with a heavy metal band - this bass is equally at home with any style of music or playing style. Seriously impressive.