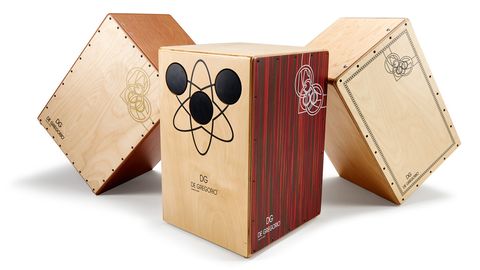 Three varying specimens, linked by a high level of playability and attention to detail. The Chanela De Luxe sounds superb while the Centaur opens up a whole new world of playing possibilities.

Ever-committed to increasing the popularity of the cajon as a mainstream instrument, Italian-born Paolo De Gregorio has continued to hone and develop these traditionally Peruvian instruments in his Spanish workshop for over a decade and a half.

We have been sent three new and contrasting professional models to sink our teeth into.

The smallest model overall, the Tokayo, is also marginally the tallest. The 9mm 7-ply birch shell weighs in at 4.2kg and measures 30cm x 30.5cm horizontally, and 49cm vertically. The frontplate (tapa) is a naturally finished 3.5mm 3-ply birch. This compact specimen is the most affordable of the three at £190.

The Chanela De Luxe and Centaur models both measure in at a slightly plumper 32.5cm x 29.5cm x 48cm. In addition, the former weighs 6kg while the latter is a touch lighter at 5.8kg. The similarities stop here though as The Centaur features a 7-ply birch body with a 3mm 5-ply tapa (also birch), while the Chanela De Luxe sports a more unique construction, using 9mm solid sipo mahogany panels and a 5-ply birch frontplate which is even thinner again at 2.5mm.

If you haven’t spotted it already, the major stand-out quality of the Centaur, despite the striking red veneer frontplate, is its electro-acoustic capabilities. Three circular trigger pads can be found on the right side of the cajon body. These are used to play sounds from an in-built sound module, located at the top of the rear panel.

The module is limited to 10 banks (0-9) which run sounds directly from an interchangeable SD card. This enables users to add their own samples to the cajon - a very exciting prospect which should really open up the usability of the instrument.

As standard, the supplied card comes with a selection of acoustic and electronic drum sounds as well as some hand percussion, which includes congas, bongos, pandeiro and tabla. It should come as little surprise that the hybrid Centaur model takes the top spot for price out of the three, coming in at £415, while the Chanela De Luxe will set you back £340.

There are two features which are common across all DG Cajons. The most obvious can be spotted with a glance through the sound hole to the internal snare system which uses guitar strings tensioned across the back of the tapa.

DG’s system allows a single steel string to stretch from top-to-bottom and then loop back up to the top for twice the contact. The top part stays fixed in place while the bottom bolts can be adjusted from underneath the cajon using the supplied hex key. This Removable Snare System (RSS) allows quick string changes using the spare provided.

The other unifiying feature is the Reduced Sized Tapa (RST), which is not only supposed to improve the performance and resonance of the tapa but also make it possible to replace it when it becomes worn. The precision drilled holes are in uniform positions for each model to allow a direct swap.

When spending some time playing these cajons side-by-side, it doesn’t take long to familiarise yourself with the personality of each one. From the first few taps, the Chanela De Luxe is noticeably crisper and more responsive than the others.

This is initially attributed to the fact it has twice as many strings as the other review models, but it becomes obvious that this cajon really possesses something that the others do not. The solid mahogany shell allows deep and booming bass notes alongside tight, snappy high notes, all presented in an incredibly articulate and dynamic package.

In our eyes, tonally the Tokayo was overshadowed a little by its siblings. Despite still possessing a satisfying thump, it couldn’t quite stand up to the Chanela De Luxe in terms of bass response or general playability. Then again, keeping in mind the price difference, you wouldn’t necessarily expect it to. What’s more, considering its smaller size and weight, the Tokayo would likely make a more portable companion on the road. Personally we wouldn’t fancy chucking a £400-plus cajon in the back of a van!

Much to our surprise, the acoustic element of the Centaur is of a pleasingly high quality, which was my initial concern. The electronic elements work well to augment the acoustic sound due to their broad dynamic range.

Some of the in-built samples are hit and miss (we enjoyed the conga and the bongo patches), but that matters little considering they can be quickly replaced with any sound you can think of. We tested the cajon with some 808 samples which made for hours of fun and opened me up to more creative playing. The rear module features mono and stereo jack outputs, mini-jack headphone socket and pedal input for easier cycling through patches. As well as mains power, the Centaur can run off battery power (with included 9v adaptor) for around two hours, making it a great live tool too.