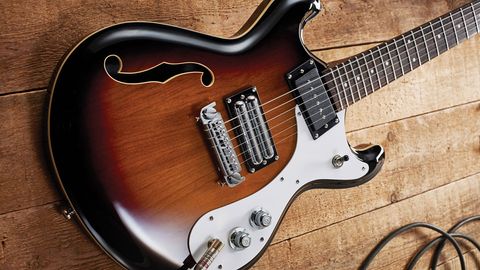 Dano’s semi-Semie could certainly rock your world if the price is ‘rite.

You might recall the occasion last year when Danelectro released its ‘64 model, a guitar that betrayed very little of the brand’s own heritage.

In fact, the ‘64 owed the lion’s share of its features to the late Semie Moseley’s Mosrite classics as brandished by instrumental cats The Ventures and punk icon Johnny Ramone. Say you eyeballed the ‘64 and thought ‘I’d be all over that if only they axed the Bigsby-esque vibrato and made it a hardtail.’ Well, the new ‘66 model should make your day.

With this latest release, Dano have spec’d a chunky six-saddle, wrap-around bridge/tailpiece with intonation adjustment. The other metal bits of note including the small UFO volume and tone knobs, and a set of vintage Kluson-style machineheads.

The ‘66 is actually based on a lesser known Mosrite beauty, first released in the year of The Beatles’ Revolver album as the Combo model. The guitar was available in six-string, 12-string and bass formats.

Like the original, the new ‘66 has a bolt-on maple neck. You also get 23 medium frets - that’s including the zero fret - tightly hugging the contour of the 356mm  (14”) radius rosewood fingerboard. If the ‘f’ hole punched through the guitar’s body hasn’t given it away yet, the ‘66 features a semi-solid body, which we can confirm is crafted from alder.

The shadow this guitar throws is predominantly Mosrite, with that instantly recognisable ‘upside down’ body and its ‘German carved’ bevelled edges. The illusion is shattered by the headstock shape, which isn’t Mosrite correct but then the double coil lipstick tube pickup at the bridge is an even bigger giveaway that this is a Dano. Yeah, okay, the headstock logo is a pretty big  clue too...

The neck pickup is a fat single coil that looks like a classic Mosrite job. Like the bridge unit, it’s wired through a master volume, master tone and a three-way pickup selector toggle switch. The tone control has a pull-push coil-split function that works in conjunction with the bridge humbucker. It’s here that we find one little niggle. The knobs are compact and cool but the tone’s coil-split switch is hard to operate unless you dig a nail under it.

The ‘66 has a slim C profile neck and a low action. The zero fret might be a throwback but it does a great job of regulating the string height. This thing couldn’t be better set up.

Plugging in, the combination of that semi-hollow alder body, the 635mm (25”) scale and the perky lipstick bridge pickup makes for bags of jangle, a sound not a million miles from a Rickenbacker. We actually prefer the single coil option on a clean setting, and that preference continues when we add some dirt.

Beat on the strings hard and you’re in Ramones territory; dial in some Germanium-fuelled filthy fuzz and you’re slap bang in garage band land for some Detroit-flavour rock. Bent notes snarl and harmonics pop off the strings with glorious unpredictability. Think Stooges, Count Five and the MC5.

The neck pickup has a fat voice that works great for jazz and blues, basically sounding like a P-90, so you can see how tonally versatile this guitar is. Sonically, we love the clarity and note separation on all positions on the ‘66.

If you can find an original Mosrite Combo you won’t pay much more than Dano are asking for its new Korean-made rendering. Like its ‘64 catalogued brother, the ‘66 impressed us on just about every level. It’s well-made, tonally versatile and easy to play.

We like the bright and lively resonance of that semi-hollow construction and the fact that the robust hardtail makes the guitar so damn fun to pound on with your right hand. The only thing that bugs us is the price.

The ‘64 was too expensive in our opinion and the ‘66 is guilty by association. A quid shy of a grand is a lot of money for this guitar. You don’t get a case at that price either, and there is the ever-looming competition from the likes of Eastwood who offer Mosie-flavoured gear for less lolly.

Our advice if you’re smitten by the  ‘66 is keep ‘em peeled for a good deal. Dano’s semi-Semie could certainly rock your world  if the price is ‘rite.