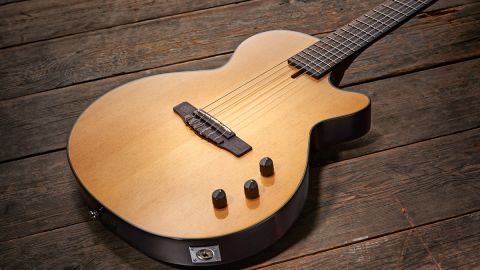 Trying to entice steel-string players over to nylon is a growing market and Cort has made a very playable stab at it.

As one of the largest manufacturers of electric and acoustic guitars on the planet, Cort offers a massive range, at very affordable prices, with some pretty forward-thinking designs, too.

This Indonesian-made Nylectric is a case in point: a nylon-string electro - designed specifically for stage use - that owes little to the heritage of the classic guitar.

Based on the single-cutaway outline of the Gretsch-y Sunset electrics, the Nylectric has a 53mm deep thinline, hollow chambered mahogany body, topped with a thin (laminated) spruce fan-braced top.

There are no soundholes, which gives the Nylectric a modern look, enhanced by the trio of electric guitar-like controls - volume and centre-notched bass and treble cut/ boost EQs - for the adjustment of the B-Band A11 under-saddle/preamp system.

In typical ‘hybrid’ style, the Nylectric centres on a quoted 650mm (25.6-inch) scale length but features a reduced-width 45mm nut, a 305mm (12-inch) cambered rosewood fingerboard, and classical-width 60mm string spacing at the compensated saddle of the tie-block bridge.

The neck ‘bolts’ to the body via four inset screws on a heavily-contoured heel, emerging at the 16th fret like a Les Paul rather than a Ramirez. There’s a very unclassical feel to the mahogany neck - a nicely relaxed C profile - which, combined with the reduced width, shouldn’t be a problem for any steel-string players, not least in its fast satin finish. The rest of the guitar is glossed, not too heavily, and there’s a choice of this natural or a black colour.

As its looks suggest, the Nylectric feels more like an electric than a standard nylon-string classical. Played seated, the guitar is comfortable, although the neck extends a lot further to your left than the standard instrument.

Strapped on, things feel even more electric-like, but the guitar is light in weight (2.24kg) and nicely balanced. Despite the lack of any soundhole, there’s a good unplugged, low-volume sound, ideal for noodling in front of the TV or for practice.

There’s a classical-ish character that makes Latin and jazz style feel very comfortable, too, thanks to the neck. And the range is bonkers - you can easily reach the top 22nd fret.

Plugged in, it’s not the biggest, fullest electro nylon-string we’ve ever heard, but the string output is balanced with a good level and clean signal with no intrusive hiss. The EQs are broad, and adding some bass and a little treble reduction give us a little more body. Used with a pick for a little fiery Latin lead line action, the Nylectric sounds really good: less so for solo performance, but not too shabby, either.

Trying to entice steel-string players over to nylon is a growing market and Cort has made a very playable stab, focusing more on stage use, especially with a band. The Nylectric is nicely made, lightweight and pretty feedback-resistant (it’s still a hollowbody, don’t forget); it feels more like an electric and plays effortlessly, especially for pick-fuelled Rodrigo-like styles.