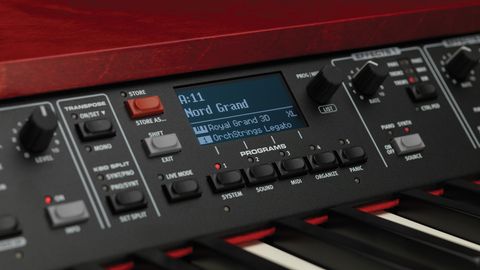 An investment in terms of price, size and space, but this is a quality piano for live use as well as a potential studio centrepiece.

It’s become nearly impossible to watch a live concert without seeing one of Nord’s red-coloured instruments onstage. For 25 years, the Swedish firm Clavia has crafted boutique instruments by hand in Stockholm that have found their way into the highest ranks of music.

The company’s Electro and Stage line of keyboards nearly single-handedly ushered in the vintage electro-mechanical keyboard craze. While Nord keyboards traditionally use actions by the Italian firm Fatar, the new Nord Grand stage piano is a joint venture between Clavia and the Japanese piano behemoth Kawai. The result is a premium pro instrument that tackles stage or studio with ease.

Previous Clavia offerings like the Nord Stage have used medium-weighted hammer actions made by Fatar. The reasoning is simple; for multi-purpose keyboards designed to cover a wide variety of sounds, a balanced approach to the keyboard action seems to be the best choice.

The new Nord Grand, however, is geared toward the piano purist. There’s no pitch bend or mod wheel, and a minimum of onboard displays and controls.

The centrepiece is a hammer-action made by Kawai. While Nord’s HA action in its Stage line was on the lighter side, this new Kawai offering is weightier and more piano-like. We found ourselves playing complex passages with precision, and that’s not always easy on a digital piano.

Clavia calls the white key coverings on the Nord Grand ‘Ivory Touch’, and they feel great. Coupled with the triple sensors that track hammer movement across the keyboard, it’s a compelling piano experience indeed.

The Nord Grand is chock full of sounds. From lifelike acoustic pianos to Nord’s famed sample library, there’s a sound for every circumstance here. There are also a plethora of sound-shaping options as well, from Nord’s ‘seamless transitions’, which allow a sound to ring out even when a new one is selected, to keyboard splits (seven split points with crossfades) and layers.

Nord keyboards have always allowed a great degree of sonic editing, and the Nord Grand is no exception. A host of additional onboard controls enable the further manipulation of sounds. From multiple keyboard touch settings to adjust the action response to your own preference, to string resonance that recreates the sympathetic dialogue between piano strings, there are options for days.

Connect the included Nord Triple Pedal and the piano realism steps up a notch, with Soft and Sostenuto pedals and simulated pedal noise. There’s also a three-band EQ, a selection of piano filters to add character to acoustic and electric pianos, and a ‘Soft Release’ mode that makes the release time longer when selected.

Our test unit booted up with the ‘Imperial Grand Lrg’ sample, in Heavy touch mode with string resonance. Rich-sounding indeed. Enabling the Sample Synth section immediately layered OrchStrings Legato on top. A quick adjustment of the level knob for that section dialed in a compelling piano/strings combo patch. Setting Effects 1 to Wah on the piano source took the sound into new terrain, with a percussive, flangey piano timbre under the shimmering string pad.

Not ready to stop, we added Chor 1 to the piano sound under Effects 2 for an even trippier, thicker piano sound. Then we added some delay and a twin amp simulator, and we’d found a sound of our own, in under 30 seconds.

We were duly impressed with the Nord Grand. We like the action, the flat top for placing other keyboards and/or pedals, the ease of editing and layering sounds, and the ability to go from realistic acoustic timbres to wild, experimental ones.

We can see the Nord Grand becoming a studio centrepiece. It’s not the cheapest or lightest stage piano out there. But if you’re looking for a solid, immersive piano experience, check it out.

MusicRadar verdict: An investment in terms of price, size and space, but this is a quality piano for live use as well as a potential studio centrepiece.

"Clavia know a thing or two about stage pianos, and this might be the best one yet." Sound on Sound