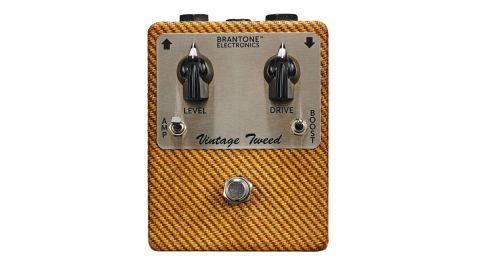 A classy source of rich low-to-medium-gain drive and a neat way to get some vintage Fender Tweed tone from your own amp.

Plenty of pedals aim to recreate the Fender ‘Tweed’ sound. Some even have paint-jobs to reflect that look.

However, Brantone Electronics has gone one step further with a pedal that’s actually covered with the same tweed material that lumps together that particular period of Fender amps. And it looks great!

If you’re in need of a recap of just what a Tweed amp is, the name relates to Fender amps from about 1948 to 1960 when they had a varnished stripy cloth covering that resembled tweed. The covering generally changed to Tolex in 1960, although a couple of amps continued the tweed look for a few years after that. The main desirability of a Tweed amp, though, is its touch-sensitive playability and a sound that transitions easily from clean, breaking up into a roaring flat-out drive.

Our Vintage Tweed pedal has three amp voices representing three of the most cherished tweed amps: Twin, Bassman and 5E3 Deluxe. The sounds are dialled in with just Level and Drive knobs, but there’s also a handy toggle-switched 10dB boost to give you a little extra at the output. There’s plenty of responsiveness with this pedal, which lets you put a bit more hair on a note as you dig in and cleans up naturally with guitar volume.

All three voices definitely have that vintage Fender Tweed family flavour, but they’re each sufficiently different to justify their inclusion here. The Bassman may be the one you’d gravitate towards for the more chimey Fender cleans and just beyond. It doesn’t get quite as driven as the other two with Drive at full, but it does ‘clean with a bit of edge to it’ brilliantly.

The high-powered Twin here offers more dirt and a bit less in the lower end. You can crank it up for a touch of Keef as it delivers a raunchy drive that maintains string clarity. The most drive is delivered by the Deluxe, a bit fuller in the low/midrange and capable of getting close to those raggedy Neil Young tones.