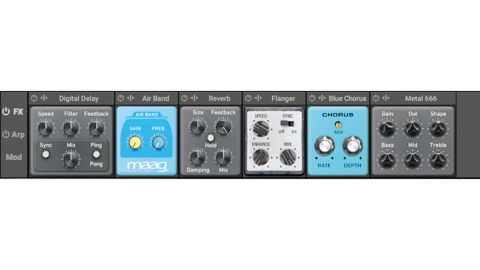 A strong virtual instrument debut with solid sound and versatile options. The RRP is high though, and it may take its toll on your CPU.

Founded way back in 1999, Brainworx has become firmly established as one of the leading plugin developers, specialising in signal processing, mid/side mix tools and emulations of vintage gear.

Since 2012, it has also been a major part of Plugin Alliance, the plugin platform established by their founder and CEO Dirk Ulrich. The one thing the company hasn’t turned its hand to up until now is virtual instruments. For its debut, Brainworx draws inspiration from the Oberheim SEM, a classic analogue monosynth which has already been modelled by Arturia for their SEM V plugin and referenced in other vintage-inspired synths such as U-he’s Diva.

As you’d expect from a company with such extensive experience of modelling analogue hardware, the basic sound of bx_oberhausen is excellent. Clichés like ‘thick’ and ‘fat’ are so overused for analogue synths and software emulations of them, but in this case they’re justified; the SEM was, after all, one of the pieces of gear that helped define those clichés about how a classic synth should sound.

The SEM was monophonic, but multiple units could be chained together (and, indeed, were offered as such by Oberheim) in order to create polyphonic sounds. Some plugin developers provide a polyphonic option on their emulations even when the original was resolutely monophonic and designed to be that way, but this is one case where the polyphonic option really makes sense. However, when the original SEM was produced in the mid 1970s, it wasn’t uncommon to see component tolerances in the order of ±20%. As such, it wasn’t likely that any two SEMs sounded quite the same when they were brand new, let alone as they aged and their components began to drift further out of spec.

To deal with this elephant in the room, Brainworx has modelled the circuits with the same Tolerance Modeling Technology employed in their SSL and Neve channel strips among others, taking into account those inherent inaccuracies. A TMT slider allows you to switch on and off additional ‘analogueness’ as you see fit, which becomes increasingly obvious as you dial up the number of voices to play polyphonic or unison parts. Unison in particular quickly gets blisteringly juicy as you increase the voices.

Intriguingly, Brainworx has also employed some of the mid/side processing options they’ve used extensively over the years. The VCF M/S knob lets you determine how much of the mid and side parts of the signal are sent through the filter and which bypass it, introducing stereo width. It’s a unique feature which is useful as a mix tool but also interesting creatively.

There are some small negative points about bx_oberhausen, the first being its relatively high CPU usage. More significantly, it feels expensive at the full asking price of $249. At the time of writing, bx_oberhausen was on an introductory offer of $179 before any of Plugin Alliance’s regular deals and discounts, so it’s clear that there will be plenty of opportunities to buy the synth at lower prices, but we can only really judge its value at the full retail price, which means it’s up against synths such as U-he Diva (179 euros, around $200), which includes an excellent SEM filter mode. Tough competition, but bx_oberhausen is well worth a look.