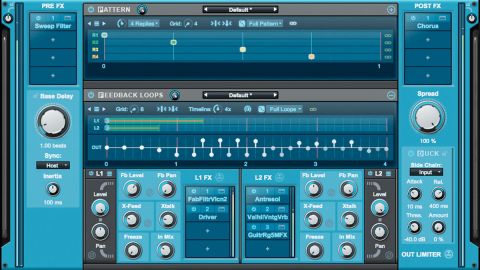 This plugin-hosting delay effect is as cool and fun to use as you’d expect, taking your echoes to experimental new heights.

Every delay has a feedback control, letting you send the delayed output signal back into the input for ‘repeats of repeats’.

If you can - by hook or by crook - add an effect into the feedback loop, every echo gets an extra dose of it with each pass. Pitchshifted delays get higher or lower with each repeat; distorted delays get trashier and trashier each echo, and so on. It’s a great creative effect, but few hosts will let you set it up.

Late Replies aims to make obstacles to this a thing of the past, giving you two delay lines and 25 built-in effects to insert into the feedback loop. But why stop there? Developer Blue Cat Audio has a history creating plugins that host other plugins, and it has imbued Late Replies with this ability too.

While feedback loop effects might be the headline, there’s plenty more to discover here. The plugin uses a ‘tap’ method to build its delays, letting you select up to eight ‘Replies’ (repeats) and time each one visually on a grid.

Each Reply has four slots for effects, meaning that you can imbue each repeat with its own treatment - varying filter settings, modulation FX and loads more. Used like this, Late Replies almost covers the territory of a sequencer. Preconfigured setups of taps can be selected as presets, and you can save your own.

After the Replies comes the all-important Feedback Loops section - two separate feedback chains, each with variable Feedback Level and Pan, crossfeed and crosstalk. There’s four insert slots in each for loading effects.

The 25 in-built devices take in shifters, modulators, dynamics, EQ and filtering, utilies... even other delays - and get this: you can even load another copy of Late Replies within Late Replies! But the sky’s the limit when you can load any plugin you choose into any tap or into the two feedback loops.

Late Replies successfully handles both VST and AU effects - even at the same time. We had Audio Units running in the now-VST-only Reason, for example. The plugin hosting is great, but after some time with the Late Replies, it becomes clear that that’s not necessarily how you’d use it most - sure, digging around in your plugin collection to create unique and sometimes insane effects is a brilliant feeling, but Late Replies offers more than enough with its own onboard processors.

We can see ourselves reaching for a particular VST or AU effect when we have a specific result in mind, but for 80% of uses, we’ll be more than happy to ‘go native’, as it were.

There’s a Panic Button and limiters onboard, plus another four effects slots on the input and four on the output, plus a sidechain section for automated ducking of the delay signal.

Late Replies’ interface is generally trusty but could be better-honed, but this is the only gripe with this otherwise highly inventive, creative and - crucially - stable delay workbench.