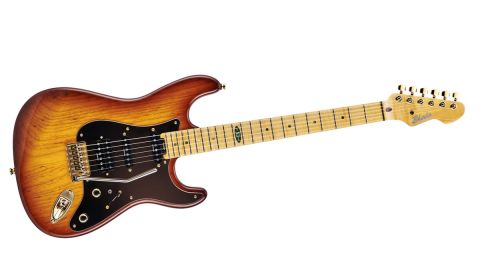 This Blade remains a very sharp tool and you certainly don’t have to be an 80s revivalist to enjoy it.

If you were around guitars in the late 80s, you couldn’t miss the new Levinson Blade.

Hugely of its time in terms of style, it offered a swathe of innovations all incorporated onto what was originally a Japanese-made Stratocaster clone. Fender itself was just getting back to building USA guitars that seemed a little ordinary by comparison. When this writer awarded the Blade RH-4 ‘best electric of the year’ or some such accolade, we were given a right talking to from the bear-like Fender veteran Dan Smith. While there’s plenty we don’t remember from the 1980s, that meeting is one we recall vividly!

Fast forward to the present and guitar companies don’t come bigger than Fender. Blade? Well, Gary Levinson remains very active. But was all that fuss back in the day valid? And what is the Blade RH-4 like three decades on?

Pulling the guitar out of the very smart soft case, there’s an undeniable time-warp vibe. The late 80s wasn’t a time of vintage clones and relics so, initially, it was the shockingly modernist colours, such as Misty Violet and Ocean Blue, and that mirror scratchplate that made you notice a Blade.

Our RH-4 Classic here is a deluxe version of the standard 30th Anniversary model and swaps its ebony fingerboard and glossed neck-back for a satin-finish lightly toned flamed maple neck and a more classic Brown Sugar Burst finish. It’s relatively demure (even though its gold-plated hardware adds some bling), fingerboard dots are abalone on the lightly flamed maple fingerboard, while a 30th Anniversary logo tells us exactly what the guitar is. It might not have had a vintage dress (although they came later), but the RH-4 was certainly vintage-informed. The body here is centre-joined light ash with a deep vintage-style rib-cage contour and slightly angular forearm contour. The heel is tapered, reducing its depth at the tip. It’s typical of a raft of tweaks.

The neck is immediately engaging, though its shape is very mainstream. The contrasting headstock plug tells us the truss rod adjustment is at the body end of the neck, but removing the Levinson-logo’d plastic plug you get access to a multi-holed nut, so tweaks are dead easy. Again, plenty use a similar feature today, but that wasn’t the case back in the late 80s.

One of the Blade’s most innovative features is its Falcon vibrato, which uses two blocks: as you down-bend they combine with the three springs for a standard down-bend feel. When you pull the arm up, however, it’s only the forward steel block that moves, the main brass block remains stationary and the vibrato stays flat on the body. Why? Well, with the Fender design (and virtually every other floating vibrato), when you bend one string, the other strings go flat. Not here. In fact, if you break one string, the others stay at pitch. Brass block aside, the rest of the vibrato is steel including the block saddles with their friction-reducing spring steel rollers. If you want a more conventional two-post vibrato, the FT-3 is offered on the special order RH-4 Standard.

To complete the vibrato system, today we have Schaller rear-lock tuners with higher E and A string posts, and a friction reducing nut. Another neat feature is the height-adjustable string tree - or Adjustable Tension Guide, as Levinson prefers. Adjustable from the back of the headstock, it allows you to finely tension the top E and B strings in terms of their back angle behind the nut.

As the ‘H’ in the guitar’s name indicates, we have an open-coil humbucker at the bridge paired with two single-coil-sized stacked humbuckers with flush rod magnet slugs. These pass to a five-way lever pickup selector and just master volume and tone with knurled Tele-style knobs. The tone control has a push-push switch that splits the bridge humbucker, but the real innovation lies in the Variable Spectrum Control, now in its third VSC-3 revision, introduced by that small-tipped three-way mini toggle. In centre position, the VSC is bypassed (and the guitar is passive); move it down and you engage the midrange boost; push it up and you get a combined treble and bass boost. The three frequencies can be pre-set to your taste via three trim-pots accessed through the holes in a small rear-covered cavity that also holds the necessary nine-volt block battery. Our memory of the RH-4 was of a precisely built, finely tuned and tweakable guitar. None of that has changed.

It’s not 1987 and, let’s face it, there’s no shortage of good Stratocasters to tempt us today. There’s also little doubt that you can add this one to your list. It’s a carefully considered piece and extremely player-centric. The pretty big frets on the flatter-than-vintage ’board give a very positive playing experience from the off. The neck falls close to Fender’s American  Professional, a nice chunky but not over-big ‘deep C’. Fretting, fettling and setup all fall right in line with contemporary taste. To be picky, the only thing we’d like to see is a more rounded fingerboard edge, but it doesn’t really ruin the fun - the near-perfect weight plays hugely in its favour.

Catch any episode of the endless reruns of Top Of The Pops from the late 80s and if you don’t see a Blade you’ll hear where it’s coming from: that processed crystal clean, bouncy rhythm tone contrasted by a face-melting saturated lead line or three. If you were working in that world back then, or simply had to cover some of those songs for your function band, you needed those sounds. For many of us, the VSC was the Blade’s masterstroke. In centre position with the circuit off, this drops right into good Strat tone territory, particularly with the bridge humbucker split to voice the screw coil. There’s bounce and balance in spades with a pretty classic output that’s certainly not hot. Neither of the single coil- sized humbuckers sounds overly rounded or ‘humbucking’ (although they are a lot quieter in terms of hum-pickup than our reference Strats), and unless you like ultra- pristine sparkle, this is an excellent catch-all mainstream set of passive sounds.

How you like your bridge humbucker in an HSS configuration is a pretty personal choice. The humbucker here has a pretty classic output with good clarity and enough poke to dominate the single coils. On the other hand, you might want to pull it back to give a more even hum-to-single-coil response. And this choice extends to the VSC circuit as well. As set, there’s a good fruity boost from the midrange, but, of course, its effect is dependent on which pickup or combination you’re voicing. While there’s plenty of boost available, you don’t have to use it like that - trimming the boost back a little adds a touch more humbucking-like colour, which is pretty useful, especially if you’re using different amp channels and a more gained outboard boost.

Likewise, that treble and bass boost seems a shoo-in for those classic Strat pickup mixes, creating an enhanced ‘studio’ style voice, maximising the high-end sparkle and giving some kick to the lows (effectively a midrange cut). It drops you right back into 80s gloss but also any soul, funk or pop rhythm from The Meters through Madonna to Daft Punk and plenty more. Again, you can tweak those trim- pots to lessen the effect or just add a little brightness without bass boost, for example. Even if 80s pop and the like are the last thing on your ‘must-have tones’ list, the VSC-3 gives you two additional voicings for the one pickup set that you can tune to your needs, including simply brighter and darker versions of the passive sound.

The elephant in the room here might well be the vibrato, however. It certainly does what it says, and if you can’t abide the doublestop bend dilemma of any Strat-like floating vibrato, this works. But the downside is that pulling up the vibrato feels quite stiff, unlike a floating or up-tilted six-screw or two-post vibrato. But it stays in tune extremely well, even with quite energetic down-bends.

Back in the day, the Blade guitar seemed perfectly suited for the glossy pop and crossover bands of the time before grunge hit hard and we all (well, many of us) changed direction. Today, however, we’re reminded firstly of what a tidy vintage-informed HSS Strat-alike the RH-4 remains, but also that the VSC, however you may use it, expands this guitar considerably beyond what most makers produce.

Yes, there’s a lot more competition in the Strat-inspired market today - an understatement! - and not everyone wants their boosts onboard, but those additional voices make so much sense (even if you’re using an extensive pedalboard) that, if we’re honest, our standard reference Stratocasters now sound a little ordinary. 30 years on, this Blade remains a very sharp tool and you certainly don’t have to be an 80s revivalist to enjoy it.