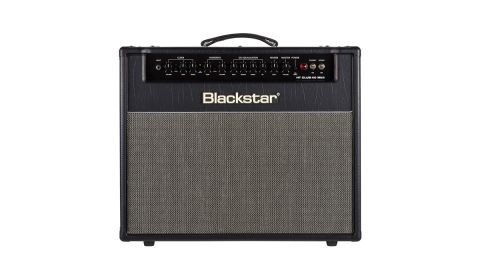 Has Blackstar created a perfect amp? Quite possibly, yes.

For years, Blackstar’s best-selling HT Venue range of valve amplifiers has been the benchmark in the highly-contested mid-price market, where the Venue amps have become go-to favourites for working players.

So, replacing or upgrading them becomes a nail-biting challenge. There’s the old adage of ‘if it ain’t broke, don’t fix it’, but for Blackstar, standing still has never been an option - it’s why the company was formed in the first place.

So, after nearly three years and possibly the most intensive R&D project in the company’s 10-year history, here we are with the new, improved MkII HT Venue, and the amp that could well become the range’s bestseller, the HT Venue Club 40 1x12 combo.

The new HT Club 40 looks reassuringly familiar, with the same front-facing control layout, however, practically every detail has been worked on and sweated over. It’s a smart-looking combo with pleasing proportions and looks the part on bigger stages, while being portable enough for smaller pubs, clubs and restaurants.

The HT Club 40’s control panel has separate channels for clean and overdrive, with two footswitchable voices on each channel. There’s also a new, low-power option, which reduces output from around 40 watts down to just four watts. Global controls include a master volume and level control for the Club’s built-in digital reverb.

On the rear panel, you’ll find extension speaker outlets and an effects loop, with new features including a USB recording output together with speaker-emulated line outs on jack and XLR.

Inside the chassis, most components live on a high-quality PCB, which is through-plated for long-term reliability. The parts are first- class, and the economical layout is typical Blackstar, keeping hiss and hum to absolute minimum levels.

Like all Venue amps, the Club has a hybrid valve and solid-state preamp joined to a classic dual-EL34 valve output stage. The choices are pragmatic, using valves where they do the best job of generating gain and overdrive effects, while top-quality op-amps are used elsewhere for effective EQ and filtering.

The MkII’s clean channel has a completely reworked architecture with two tightly-defined voices, best described as classic American and classic British, which can be pre-set on the control panel or footswitched. Although only one button is pressed, lots of changes happen inside, including preamp voicing, EQ and valve gain structure, as well as the power amplifier damping.

A similar thing happens on the overdrive channel, with a choice of two voices called ‘classic crunch’ and ‘super- saturated lead’, which can be infinitely tweaked between Brit and USA response using Blackstar’s patented ISF control. Like the clean channel, these voices have been reworked to be richer and more responsive. The icing on the cake is the HT Club’s integral digital reverb, which can be switched between a bright plate or a darker room setting.

In use, the HT Club 40 MkII is jaw-droppingly good - while the MkI version was efficient if a little bland sometimes, the MkII is full of character and attitude, with astonishing tonal depth and response that will have many top-dollar boutique amps struggling to keep up.

From punchy Fender and Vox-influenced cleans that work equally well with single coils and humbuckers, with enough reserve headroom to really cut through, to stunning classic rock touch-sensitive mild distortion that’s perfectly matched for a decent Les Paul and all-out modern rock sustain, the new MkII HT Club 40 is, well, much more of everything that made the MkI so good.

It’s great to see the HT Venue’s good looks combined with new stand-out features like the power reduction, which drops the output down to useful recording and practice levels, as well as the dual line outs and USB audio. Other clever touches are a smart, valve-saving standby mode and a Kensington lock, but above all it's the sounds that define the MkII HT Venue and crikey, they're superb.