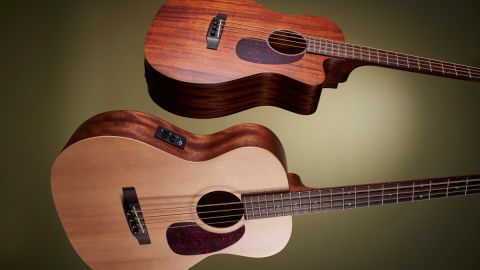 Outstanding bang for your buck, especially the BME.

Handled outside the USA by German distributors AMI, Sigma Guitars is a Chinese-made line of inexpensive instruments originally launched by the Martin company in the 1970s to compete with the then-new wave of cheap Japanese guitars entering the West.

Nowadays the Martin heritage is still visible in Sigma's headstock logo, but in every other respect they're just another of many, many East Asian guitar marques to entertain the modern musician looking for a cheap axe. So how do these two bargain-priced acoustics compete?

As far as we're concerned, any budget acoustic bass is going to struggle to compete with the gold standard from recent years - the Vintage VCB 430, a £299 bass which we reviewed a while back. The Sigma BMC-15E we're reviewing here costs £449, so there's no need to compare it with the Vintage, but the Sigma BME is just £16 more, so let's do a quick compare and contrast.

Like the Vintage, the BME is put together remarkably well for the price tag. The big stuff is taken care of - neck join, bridge, frets - exactly as you'd hope, and the details are satisfactory too. The Grover machine heads do their job smoothly, the battery compartment operates as you want it to and the action on our supplied model is a testament to the simple, solid bridge design.

You get a Fishman pickup and controls on the Vintage, whereas the slightly more expensive Sigma has own-brand electronics - but what's in a name, unless you're planning to dismantle the pickup and compare the components? Rigorous reviewers though we certainly are, we'll leave that job to someone with an electronics degree.

In fact there's very little difference in build quality between the BME and the Vintage, so we'll stop droning on about the latter and call it a draw. Moving to the BMC-15E, a beast that costs an extra £134, the first thing we notice is that it boasts a mahogany top against the cheaper bass's Sitka spruce, although both employ mahogany for the sides and back.

This, plus the Fishman Isys+ system on the more expensive bass, is presumably where the extra ton of cash is going. Like the BMC, its construction is close to perfect, with no flaws that we can detect without a microscope.

Choose one of these Sigmas. Your choice will largely be dictated by the single cutaway and mahogany top of the BMC-15E: with this bass, you'll have access all the way up to the 23rd fret. Yes, there are 23 frets. Why, we'll never know, unless some kind reader writes to us and tells us that there's a solid reason for stopping just short of two octaves. Possibly it's because the 34" scale feels even longer than usual thanks to the nature of the acoustic bass, where the bridge is necessarily closer to the soundhole and therefore the headstock is correspondingly further off to your left, so a 24th fret would be impractical. Anyway, you'll just have to bend the strings a bit to get that second octave...

On both instruments, the necks are pleasant in feel, encouraging fast playing and access to the upper register. Sure, as they're acoustic instruments you'll find it tricky to avoid fret squeals if you're unplugged: hook up to an amp and roll off the top end if that's a problem.

Indeed, both Sigmas are strong at the treble end and lend themselves more readily to slapping than most acoustics, so funk players will be in their element. Those in need of a monstrous low end should look elsewhere: these basses supply a reasonable amount of rumble and no more.

Simply put, both basses are a hell of a lot of fun to play. The big, growly sounds of the strings will give your folk or blues band serious presence. The onboard tuners - a gift from the world of acoustic guitars - make life easier without a doubt, as do the battery LEDs. Is there a difference in performance between the Sigma and Fishman pickup systems? Not that we could detect, but no doubt the quality of the higher-priced unit will reveal itself if you plan to gig one of these basses night after night.

You'll be absolutely fine with one of these low-cost, high-value acoustics as far as we can tell. The big picture, of course, is that we're living in a kind of golden era for cheap imported basses. Playable, apparently well- constructed and totally friendly to the player's needs, these instruments serve a requirement very well indeed - and don't charge half as much as bigger names might. Investigate with confidence.