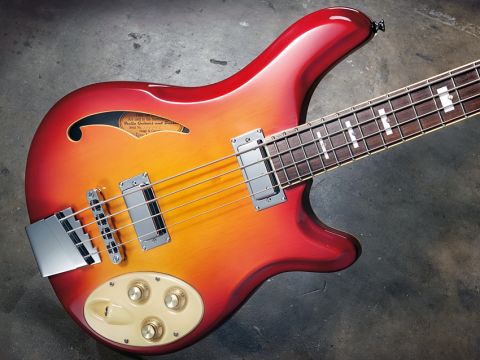 A cost-effective, lightweight and funky-looking bass with some excellent old-school sounds and more.

Many of the guitars and basses in today's market draw heavily upon the classic models of the past, and this Rimini is no exception.

However, rather than following the more obvious Fender/Gibson route, Italia has chosen to look to Rickenbacker for inspiration and styling, and even then not the obvious choices by any means.

This is based loosely on the 4005/4 that emerged in 1965, with a shape that is sometimes referred to as Capri-style. It was a stylish design back then and now, in this Italia persona, the Ricky influence again results in a very tasty- looking bass.

The semi-hollow body features a contemporary shaped f-hole, which is neatly bound to match the neck and the back edge of the body. There's also a chamfered edge feature around the cutaways, while at the body end a larger scoop houses the distinctive tailpiece.

With all this shaping, and in this finish, the Rickenbacker DNA is easy to see, but the Trev Wilkinson design is very clever - suggesting Rickenbacker, but remaining very much Italia.

The bridge is a separate tune-o-matic-style unit, which allows fine string adjustment, and the standard Italia surface-mounted control panel includes an upward-facing jack socket that neatly directs your lead towards the strap button, just where most of us like it to go.

The headstock is a standard paddle shape with two-a-side tuner configuration (rather than the half-slot design that features on the guitar versions), which is definitely a far more practical idea for a bass guitar and, although the scale lengthis fractionally undersized, it certainly looks a well-balanced instrument.

However, while the hollow body offers tonal and weight advantages, it does mean the bass is a tad top-heavy strapped on - something for the ultra-fussy to consider.

A semi-hollow body can provide additional resonance with an old-school vibe and character, and the Rimini doesn't disappoint. However, with just a single tone adjuster shared between two pickups, the majority of the sound shaping is achieved by blending the volume controls, then using the tone as a final tweaking device.

Like we said, it's old-school, but this simple system is extremely practical and the tonal results you get from it are very good indeed.

With the tone rolled back to full bass and just the neck pickup in operation, we hear a very full low-end that's delightfully warm and robust. Add a little of the bridge pickup into the equation and an edge of clarity seeps in for a classic, traditional sound that should work in numerous genres.

At the other extreme, with full treble focused on the bridge pickup alone, a surprisingly honky element is introduced. The result is that as you alter the mix between the volumes, a host of funkier sounds emerge, and it's all usable stuff.

The tone control is very subtle, but there's enough variation to ensure a great final result for your sonic endeavours.

Currently being championed by Dave Bronze (who has played with Eric Clapton, Gary Moore and Paul McCartney) and American session player Dave Roe (Vince Gill, Johnny Cash and Dwight Yoakam), you get an idea of the available sounds.

With good looks that stray from the well-trodden path, plus a host of classic and original sounds, this has to be one of the most appealing semis on the market.

The price is pretty attractive too: it'd make a great second bass for more old- school gigs or something different to get you noticed without upstaging the guitar player. And we wouldn't want to do that now, would we?