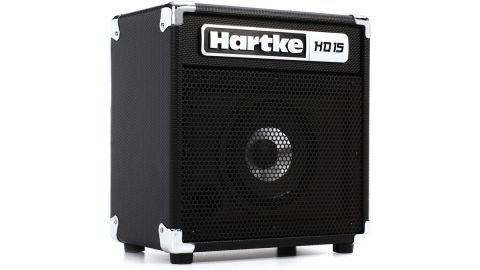 Hartke is onto a winner with these combos.

The HyDrive range, with its aluminium and paper cone hybrid, has proven to be very successful for Larry Hartke and his company.

There will always be a market for small practice combos, and this pair of perfectly formed units would appear to address the needs of those looking to practice at home without shaking the walls and annoying the neighbours.

Or is that exactly what they do? Size is almost irrelevant with current technology, after all...

The usual Hartke design ethos remains intact. These combos are built to last, sturdy but compact and simple when it comes to the control layout.

Both combos are covered in a black vinyl covering, which looks and feels fairly durable, while metal corners have been fitted to protect either unit from bangs, knocks and general wear and tear.

A solid strap handle is located on the top of each combo for carrying ease and a black metal grille has been fitted to protect each speaker. Both combos come with rubber feet, although these can be removed if you want your combo to have contact directly with the floor to improve the low-end performance.

Speakers measuring 6.5" and 8" have been used on these combos, and although this may not sound like much of a difference, there will no doubt be some tonal variation, especially in the conveying of low notes.

The HyDrive design certainly has its merits, incorporating the vibrant transient attack that Hartke speakers were originally noted for alongside the warmer, less acutely punchy performance of the traditional paper cone, so on paper it fuses the best aspects of both designs. Both cabinets have front porting to improve the bass response - and to be honest, both units will need as much help in that respect as they can get.

Both combos feature the same control panel, namely a 1⁄4" jack input, controls for volume, bass, mid and treble, a 3.5mm input for external sound sources such as an MP3 player, laptop, tablet or phone and a 1⁄4" jack headphone output. It's all very neat, uncomplicated and tidy, with nothing to get confused about: the overall design of both combos is sleek and to the point.

With several basses to hand, both active and passive, it was quite noticeable from the start how different each combo sounded.

For a 15-watt unit, the HD15 was remarkably full sounding and not especially lacking in tonal performance. Cranking the volume up with passive Precision and Jazz basses, there's plenty of volume, punch and definition on display. Obviously as you start to add hefty dollops of EQ boost and push the volume, the tone becomes a little harsh - but if you're of a plectrum-wielding persuasion, you might like the way that the sound gains a touch of grind.

The active basses benefited from their onboard EQ, so adding more from the combo control panel at times became slightly excessive. Percussive techniques needed a little help in the treble department for some extra zing, but on the whole, the HD15 is surprisingly adept for such a small combo and low price.

The HD25, with its extra 10 watts of headroom, is obviously louder and in terms of bass frequency performance, the extra speaker size certainly adds to the low end. The quality of sound is a touch sweeter, as though the bass signal has extra room to breathe without sounding forced or pushed as much as it tended to do with the HD15.

The slightly larger enclosure also gives the frequencies extra depth, which helped to present the characteristic thump you would associate with the passive basses. Giving an active five-string bass a spin, it's no surprise that the low B string sounded fuller through this unit than the HD15. The EQ is functional rather than exceptional, but the broader tones of the five-string were conveyed very well for such a small unit.

Both combos did a fine job and at these prices, there really is little to complain about. Portability is a big consideration, and both boxes get good marks in that respect.

The front end isn't full of bells and whistles, but it doesn't need to be: Hartke has done well to keep both of these combos simple, easy to use and uncluttered.

They're both hard-wearing in terms of their design and we can't imagine too many bassists being unhappy with their purchases if they're bought for their intended purpose.

You would struggle to use either combo in a full- blooded rehearsal, although mic-ing up is always an option: in that case, you may be better off looking at the larger, and more expensive, HD50/75/150 models. Either combo is a cheap, worthwhile purchase, so get out there and investigate.