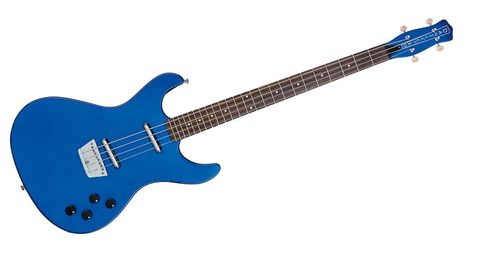 Not the most popular Dano design, but the Hodad Bass is fun to play, with an unconventional yet likeable tone.

Since Danelectro first got back into instrument production in 1998, the company has mainly revived original Dano designs from the 50s and 60s. However, the new Hodad rehashes a bass model that first appeared in 1999.

Back then, this was the first modern Danelectro bass not to revisit the brand's past, because its surf-style, leftie-look body shape was borrowed from equally eccentric American maker, Mosrite.

Like other recent Danos, the new Hodad comes from Korea rather than China, which echoes the origin of the 1999 version. The latter also appeared in baritone and 12-string guises, and the line continued until 2003, when the company quit playing the electric game.

Danelectro reversed this decision two years later, and has now reissued the Hodad, but this time only in six- or four-string formats.

The Hodad Bass may be a relatively new design, but with its Mosrite-like offset double-cutaway body style and fully painted neck, it's every bit as distinctive and characterful as the much earlier Dano designs.

The bass is a dead ringer for the recently reissued Danelectro Hodad guitar, featuring the same semi-solid construction (a plywood frame faced front and back with Masonite/hardboard), except we have four strings and a longer scale length of 756mm (29.75 inches), which is considered 'short' in the bass world.

The bridge here follows the modern Dano design, which updated the original Dano design by replacing a single wooden saddle with individual metal examples. These allow individual height and intonation adjustments, but alterations are hampered by the saddle-securing screws being sited directly beneath the strings.

Also, instead of humbucking pickups, we get two Dano lipstick single coils, without the original's rotary switch - just volume and tone controls for each.

Since most Danelectro bass guitars we've seen over the past years are loaded with the same twin-pickup passive circuitry we have here, you may think they all sound the same - wrong. The body mass plays its part, and with the relatively large body we have here, we hear a general increase in bottom-end.

With no pickup switches, this bass is all about pickup blending. Without doubt, this is something of a 'hollows' monster, with a selection of great mixed-pickup sweet spots, particularly when both volume controls are backed off slightly.

Try it that way with the bridge tone set at half and neck tone on full bass for some great Rickenbacker-like growling sounds with, surprisingly, the power to match that particular classic.

The all-metal bridge adds some extra top-end sparkle, too, which certainly adds a clean, clear and quite distinct voice. And despite the short scale, it really is a slapper's delight, with plenty of bounce and twang from the strings. Curiously, the volume and tone control sets work horizontally, not vertically as you would normally expect.

Danos were always cheap as chips, but find a good one and you'll find some very usable, characterful tones on tap. The Hodad bass makes a great starting point.

When originally introduced, the Hodad Bass was a full-scale model with a splayed headstock, three pickups and a Select-O-Matic rotary control. It was certainly a good bass, but this new version fits the Danelectro blueprint so much better to our eyes and ears.

It's a super bass to play and extremely lightweight, yet still feels substantial under your arm. Although it's less outrageous-looking than the Longhorn Bass, it's slightly warmer in overall tone.

Good quality, good sounds, good prices - what's not to like?