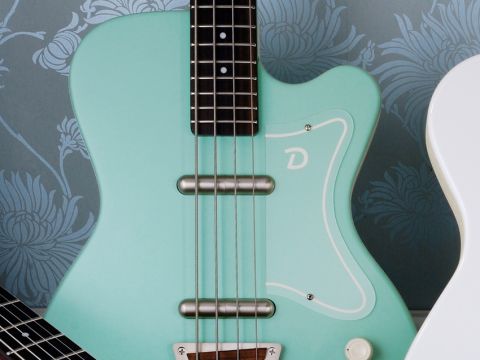 We'd fit a set of flatwound strings to boost the old-school vibe into the stratosphere.

While the first reissue, launched back in 1998, closely followed the specs and aesthetics of the original guitar ('Coke bottle' headstock, rosewood bridge saddle, vinyl body tape and the like), the 2006 56 Pro was what might be described as 'pimped'.

The Coke bottle headstock had a notch cut into it (a diet version, if you will), the bridge came loaded with individual saddles to allow better intonation and the classic white vinyl body tape had gone. The '56 Pro was a great guitar, but losing the quirky features did dent its vintage vibe a bit.

Fast-forward to the new '56 Series and the unintonatable rosewood bridge and body tape - in old spec 'Ostrich Pattern' no less - are back where they belong. There's also some curious stuff going on at the headstock end of some of these new models.

The launch of these new models coincides with a streamlining of the Danelectro guitar and bass range. Now, only the new single-cutaway '56 models, the existing double- cutaway '59 guitars and the 'Dead On 58' Longhorn bass will be available.

'The Wild Thing', an eye-popping reissue of a one-off prototype swept wing guitar uncovered a few years ago is also due to hit these shores later this year. But that's your lot, Dano-wise.

The new '56 series bass comes with the Silvertone Dolphin Nose headstock. In lieu of the concentric controls of Dano's recent six-strings, the bass has a dedicated volume control for each Lipstick pickup and a master tone. The knobs look like vintage radio jobs and are based on original spec items from back in the day.

The '56 bass has a 30-inch short scale length (a Precision Bass is 34 inches) making it manageable forjust about anybody.

The 24 medium frets are perfectly executed and the action and chunky but comfortable neck profile make it a joy to play. Again, you can't intonate the bridge on this bass.

The vintage-style enclosed tuners have the same white plastic buttons as the guitars. Most bassists prefer to see something a bit more substantial poking out the side of a headstock, but we think that big tuners would look pretty daft on such a slim headstock.

The '56 bass is further tied in with the aesthetic of the guitars in the range with the Ostrich Pattern body tape and the classic Dano aluminium top nut.The hardware on the '59 Bass is a cool satin-finished nickel.

The '56 bass is more versatile than you'd imagine. Turn up the neck pickup's volume, turn the bridge unit down, and reduce the tone, and you'll get a perfect '60s soul and R&B rumble. If we owned this bass, we'd add to the vintage depth by fitting a set of flatwound strings.

If you select the bridge pickup solo, turn the tone back up and attack the strings with a heavy pick there's a very cool Jam-era Bruce Foxton tone in there. Add some overdrive for some Ox-style chunk.

Incidentally, any concerns you may have about the lack of intonation adjustment on a Dano will vanish when you plug this bass in.

The interesting thing about Danelectro guitars is that they can hold their head high in any guitar collection. It doesn't matter if you have a wall full of Fender or Gibson Custom Shop editions, or Paul Reed Smith's finest work, you'll still get a kick out of a Dano.

The bottom line is that this new Dano is not a budget version of something. It sounds and plays great because it holds true to Nathan Daniel's original vision.

It's affordable because it's made from inexpensive materials and built, very well, in China. It also makes a sound like no other guitar.

The addition of period details such as the resurrected headstock designs, and more modern hardware updates such as humbucking pickups, adds to the desirability of this model.

The superb playability and the tone from those beefed-up Alnico pickups is the icing on the cake. Figure in the price and we reckon it's worth adding some Lipstick to your tonal makeup.