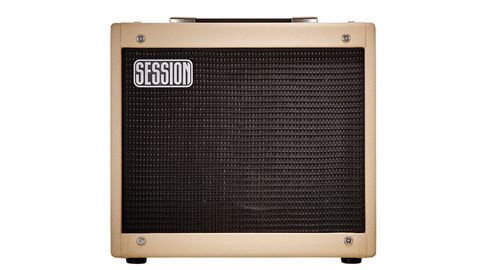 While Award Session’s BluesBaby 45 isn’t the only analogue contender capable of giving valves a run for their money, its power, portability and all-round excellent value make it a compelling choice.

The Award Session name holds fond memories for many British guitarists who were around in the 1980s.

Founded in 1979 by electronics wizard Stewart Ward, Award Session’s first amp was the valve 15:30 combo, which plugged a gap for a quality handmade British combo in the nascent ‘boutique’ market before the term properly existed. The 15:30 was used by many top pro players, including session ace Geoff Whitehorn. But the design Award Session is best known for was the famous Sessionette 75, which turned into a runaway success with more than 50,000 units shipped between 1981 and 1988.

The Sessionette’s clever all-solid-state design combined great tone with valve-like response, reliability and affordability - a perfect product introduced at exactly the right time. Ever since, Award Session has championed solid-state technology, which is put to good use in its latest marvel,  the BluesBaby combo, available in 22 or 45 watt with a variety of speaker and cosmetic options. Here we’re looking at possibly one of the most popular choices, the Celestion V-Type-loaded BB45 1x12 combo.

Hand-built in Basingstoke, the BB45 is compact and portable, making it ideal for home and studio use, as well as smaller venues likely to be intimidated by musicians arriving with 4x12 stacks. The BB45’s Baltic birch-ply cabinet is neatly joined and covered, with a slanted baffle to help the Celestion V-type loudspeaker’s projection, and forward-facing control-panel labelling.

The tough steel open-ended tray chassis is attached to the top and sides of the cabinet, so the rear panel can be removed for easy servicing, although the BB45’s robust construction means it’s unlikely to be necessary. The electronics sit on three printed circuit boards - the main board houses the preamp and power supply, and supports the front panel controls, with smaller boards for the output stage and rear panel sockets.

The output device is bonded to the chassis underneath an oversized heatsink, while a toroidal mains transformer keeps radiated hum to a minimum. The internal wiring is neat and all hand-soldered, with no spade connectors, reinforcing the Award Session’s overall vibe of pro-grade solid reliability.

The BB45 is a single-channel design, with gain, master volume and conventional EQ controls, together with a level control for the spring reverb. Two toggle switches operate presence and EQ shift functions, respectively adding extra sparkle for mid-biased humbuckers and moving the EQ’s mid notch to approximate ‘plexi’ and ‘blackface’ responses.

There’s another tone-altering switch called ‘Fat’, which adds a sizeable bass boost. This function can be foot-switched, as can the reverb, from a pair of sockets on the rear panel, which also includes an extension speaker outlet and an aux in.

In use, the BB45 is electrically very quiet indeed, thanks to careful design and the toroidal mains transformer, which substantially reduces mains hum pickup.

The BB45’s tones and drive characteristics are more Fender than Marshall, with rich cleans and a velvety distortion that flatters single coils and humbuckers. The EQ is smooth and predictable, making it easy to dial in any guitar, with plenty of range thanks to the presence and plexi/blackface switches.

Crucially, the amp’s dynamic response is punchy and crisp, with plenty of volume to spare from Award Session’s clever logarithmic power driver circuit, making it easy to forget this amp has no valves inside. Even with relatively low output single coils, engaging the Fat switch produces more than enough gain to push the BB45 into serious rock territory, with the drive control beginning to add a hint of edge at around 3.

Guitarists looking for more clarity, especially with humbuckers, will be pleased to know there’s a switchable high headroom version that’s probably better suited for jazz and country. The reverb decay is smooth but could do with being a little warmer for our ears; even so it’s ideally suited to the classic rock/ blues/fusion sounds the BB45 excels at.

Something that’s becoming more apparent recently is that new production valves can vary. Even if you replace them with exactly the same make, you might still find your prized amp sounding somewhat different to how you remember it. This is where solid-state designs like the Award Session win out, with night-after-night reliability and consistent tone.

We may have been seduced by the wizardry of digital modelling for the last couple of decades but good old analogue solid-state hasn’t been standing still. While Award Session’s BluesBaby 45 isn’t the only analogue contender capable of giving valves a run for their money, its power, portability and all-round excellent value make it a compelling choice.