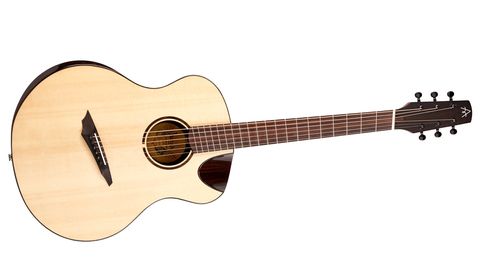 It may tip the scales in terms of price point, but the Songbird offers superb sound and an enjoyable playing experience.

The Avian range is the brainchild of USA guitar makers Michael Bashkin and Harry Fleishman.

The duo creates the designs, which are then built in China under the strict scrutiny of another relocated USA guitar maker, Abe Wechter. This means that it’s possible to buy boutique design at a more affordable price.

The Avian range has been reconsidered for 2017 and now features four models - the Falcon, Skylark, Songbird and Ibis - of various sizes and shapes, each one split into standard, standard cutaway, deluxe and deluxe fan-fret appointments, all with clean, eye-catching, contemporary design.

To begin with, we’ll address the elephant in the room: yes, this is a fan-fret model and top the range in terms of price. The thinking here is that by allotting each string a slightly different scale length, it becomes possible to tune across the guitar’s range more accurately.

This is particularly the case when we consider drop or alternative tunings. With standard fretting, it can be a case of ‘how low can you go?’ with players often taking their instruments to the absolute edge of acceptable intonation by dropping a 0.012 gauge bass string down to baritone C territory.

On a fan-fret guitar, the longer scale on the bass strings - this Avian spreads from a conventional 645mm (25.4 inches) on the treble side to 660mm (25.98 inches) on the bass side - means that, in theory at least, any such drop tuning retains stability and, to put it plainly, each string stays in tune whatever you throw at it! We’ll look at how it feels in the player’s hands a little later on, but for now, let’s investigate the basic build of the model on parade here.

This model retains many of the characteristics you’d normally associate with classic acoustic guitar design. It is slightly more bulbous than, say, a standard OM or 000, veering more towards the region of the bigger-bellied jumbo, perhaps.

It uses all-solid wood construction with Sitka spruce tops - nice, tight grain patterns with neat bookmatching - and rosewood back and sides (although both mahogany and maple are offered). The guitar has a bevel to the lower bout to facilitate a more comfortable hold. Then there’s the demi-cutaway. It might look a little like a standard cutaway, but in reality, it’s merely a recess to allow access to the upper frets, and because the cut doesn’t go too deep, it retains a lot of the guitar’s internal dimensions, meaning that the soundbox responds tonally more like a non-cutaway instrument. Clever stuff - and quite pleasing on the eye.

The neck is one-piece mahogany with a central fillet of maple and that distinctive, elongated headstock with Avian-logo’d sealed-back tuners. The fingerboard is rosewood and the frets are neatly appointed and medium sized. All well and good... so how does it feel in the hands?

The first thing you notice here is that this guitar is slightly top heavy. Not so much that it would warrant earning a black mark, you just observe it, that’s all. In fact, we notice that before we even think about the fan frets.

Tuning the guitar, focusing on what the tuner is telling us, it’s moments before we think, ‘Surely this should feel slightly weird?’ The truth is that the fan frets don’t distract the fingers as much as you might think - even a barre chord down at the 1st fret is not a problem.

The Songbird and the recently-reviewed Ibis also have very similar tonal characteristics. There’s plenty of bass, without any unpleasant boominess, and the trebles sing as sweetly as any self-respecting bird should.

Strumming chords offers up an even balance across the tonal spectrum, but the wider fingerboard suggests to us that these birds are fit for fingerstyle and tuning experiments. We try drop D and various other alternatives, and the Avians deliver every time and, furthermore, the intonation remains stable throughout.

The guitar is fitted with B-Band’s Crescent II pickup system (with both under-saddle and soundboard transducers), which features extensive controls hidden away on the player’s side of the soundhole. A slight gripe is the positioning of the battery holder. This  is affixed via Velcro to the inside of the lower bout, meaning that you’ve got to remove some of the strings to effect a battery change.

At this price point the Avians are up against other fan fret producers like Eastman and Ibanez, but they enter the ring with a great sound, offering a good playing experience - and they’re ready for all your flights of fancy!