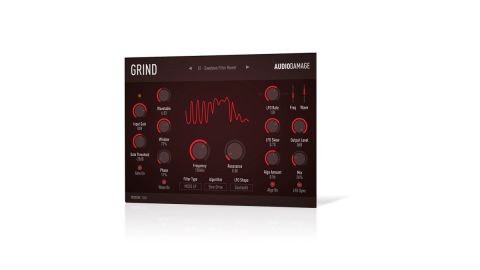 After a lengthy stint in the Eurorack arena, primo developer Audio Damage is very much back in the software game, working its way through rebuilds of their most popular plugins and creating new ones.

Hot on the heels of the Eos 2 reverb is Grind, an extreme distortion and filtering module.

Grind (VST/AU/AAX, and also available for iOS) comprises three serially arranged sections: a wavetable waveshaper, a ‘traditional’ algorithmic waveshaper, and a multimode resonant filter - with a simple gate on the input and dry/wet Mix control on the output. The general idea is to destructively transform your input signal in the first shaper, heat it up and saturate it further in the second, then rein it in and make it musically viable (or not) with the filter.

After the Input Gain and optional gate circuits (the latter proving very effective in conjunction with the wet/dry Mix control), the signal hits the Wavetable section, where a sample-based wavetable is used for waveshaping distortion, rather than the usual specific curve.

The Wavetable knob sweeps through 15 wavetables - chosen for their variety and creative spread - interpolating between them for totally smooth transitioning, as visualised in the central display. Right out of the gate, the range of waveshaping options the wavetables present is immense, but the Window and Phase knobs let you really get into the details.

Window ‘zooms in’ on the waveform, while Phase shifts it left and right, so by manipulating them together, you can reduce the wavetable down to any section of any length, from 20-279 samples. Shortening the Window often has a calming effect on the sound, as the waveform becomes less complex, making it a great target for automation or MIDI control.

Grind on the go

Like its stablemates Rough Rider 2 and Eos 2, Grind is also available for iPhone, iPad and iPod touch, in standalone (Inter-App Audio) and - yes! - Audio Units plugin formats. Although the GUI has seen the knobs, buttons and sliders moved around to make it a rectangular shape for use within AU hosts such as Cubasis and GarageBand, the plugin/app itself is identical to the Mac/PC version - indeed, presets saved in one can be loaded in the other. With so few iOS apps getting the Audio Units treatment, it’s truly heartening to see Audio Damage making the effort in this area - we hope it encourages other developers of similar status to do the same. Grind for iOS is sold through Apple’s App Store for £5. At that price, it’s a clear no-brainer for tablet musicians, particularly those rocking Audio Units-compatible hosts.

The algorithmic waveshaper offers a selection of 11 saturation algorithms (Overdrive, Distort, Cubic, Soft Sat, etc), applied to the output of the wavetable to a depth determined by the Algo Amount knob, and imbuing anything from tube-style warmth and crunch to the full-on harmonic lunacy of the awesome Sine Drive.

Grind’s resonant filter also features 11 types: regular 12/24dB high-pass, 12/18/24dB low-pass and 24dB Band-pass, Notch, emulations of the Korg MS-20 LP/HP, and the filters from Audio Damage’s “vintage” 914 (band-pass) and Filterpod (low-pass) plugins. The cutoff Frequency ranges from 20Hz to 15kHz, and like the waveshapers, the filter sounds superb, the pokey 914 BP and Filterpod options contrasting nicely with the comparative smoothness of the others.

The last piece in the puzzle is an LFO with Skew control for messing with the shape of its Sine, Saw, Pulse and Random waveforms. This can be applied, positively or negatively, to the filter cutoff Frequency and Wavetable parameters, at unsycned rates from 0.01-100Hz or synced from 1/1 to 1/32. Worthy of repeat mention here is the central display, which shows the wavetable waveform in real time, modulation and all.

Grind delivers on its ‘hardcore’ promise, with those two flavours of distortion complementing each other beautifully and the LFO bringing in an essential rhythmic element that elevates the whole thing beyond static sound-mangling. A must-have for electronic music noiseniks.