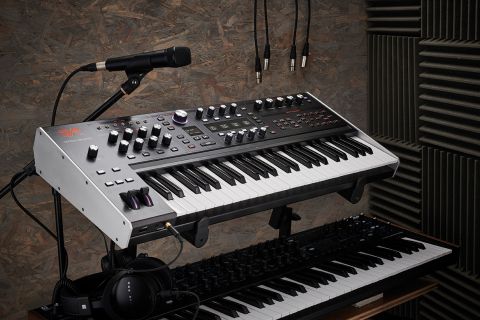 An impressive first release. Looks and sounds great, invites exploration, built to last but not overpriced. What’s not to like?

Ashun Sound Machines may be a new name to most of us but it’s part of Medeli – a well established Hong Kong instrument maker. VP of their product development team is the hugely respected Glen Darcey, who has conceptualised and brought to market products like Arturia’s ‘Brute’ synthesizer range, and Akai’s MPC Renaissance and Studio samplers to name just a few! We were in no doubt that the Hydrasynth would have no detail left unchecked. But were our (admittedly high) expectations met?

The Hydrasynth arrived nicely packed in a sturdy box and – rejoice – with a full, printed user manual. It certainly feels extremely sturdy, with all-metal construction and a unique front panel. The knobs feel smooth and weighty when turned and the clear backlit buttons feel soft under the fingers and glow a nice orange too (the ASM signature colour, very ’70s)! While the main panel is all metal and painted black, the aluminium Roland-esque end cheeks add a nice industrial look. The only slight disappointment here is the lack of built-in power supply which would have been more fitting with the overall premium feel.

Moving onto the keyboard, it’s a bespoke 49-note keybed which feels nicely balanced and positive while playing. However, it also features something quite special in the current marketplace: polyphonic aftertouch (or ‘polytouch’). This is a big moment as it brings poly aftertouch to the market at an affordable price point and I can say this for definite; once you try it, it’s hard to go back to standard channel aftertouch. For those who don’t know, poly aftertouch lets you play a chord but just add modulation to one (or more) notes in it. This is great as you can achieve effects played by one hand that can sound like a melody and accompaniment in one (and still have your other hand free). The poly AT response is pretty much perfect too – not too hard to trigger but not too easy either. An achievement on all fronts and reason alone to buy it.

The Hydrasynth has plenty of features to treat your sounds. First off, there’s plenty of high-quality effects in four blocks. The pre and post effects include chorus, flanger, rotary, phaser, lo-fi, tremolo, EQ and compressor, while there are five delay types and reverbs. The quality is impressive and allows sounds to really breathe. As mentioned, effects can also be modulated, which lets them truly become part of the sound design process. ASM also provides a comprehensive arpeggiator onboard with several octave modes, tap tempo (for jamming along live), swing, gate, ratcheting with probability (called ‘chance'), 64 preset phrases, chord mode, plus latch and sustain. The arp’s deepness certainly does make up for the lack of onboard sequencer.

If we examine the front panel in chunks we quickly understand how this machine works under the hood and on the surface. It’s very logically laid out in clear blocks of functionality. Starting on the left-hand side, you have master volume and a control to switch on glide (glide modes include logarithmic, exponential and linear curves, much like my Andromeda).

Then there’s a ribbon button (for setting how the beautiful long ribbon controller affects sounds) and a chord button (hold chord until it flashes, press up to eight notes and then trigger them from one key (much like some classic polysynths). To examine the ribbon a little more – this is a very nifty thing indeed and can act as an instrument in its own right (played like a theremin), for modulation duties, or to bend held notes/chords.

One change we would like here is for the pitches on the ribbon to line up with the notes on the keyboard (for example, press middle C and the ribbon position directly in line is also a C). A couple of other things of note, (whilst we are talking performance controls) are the unique paddle-style pitch and mod wheels. These paddles are clever and they do add a more nuanced way to move the wheels. They also light up in several rather lovely colours along with the big selector wheel and this can be customised when saving patches.

In the next section, you’ll find CV ins/outs and an arpeggiator and an area called ‘main system’. Here you can change patches and banks, save, choose favourite patches, initialise, and create patches out of thin air with the random button (a feature I also love on Korg’s Wavestate).

A nice big ‘home’ button also takes you back home if you ever feel you’ve strayed too far! In this section is also the biggest screen which deals with patch selection (and other tasks) while also displaying waveshapes in real-time (much like Korg’s ‘Logues).

Next up is the master control section. Here, you have eight chunky rotary controls, each with a corresponding backlit white button and with LED rings to show stored/current values. There are also four smaller screens which line up with the rotaries – the top third of each screen displays assignments for the top row of knobs and the bottom third, the assignments for the lower set of knobs.

The middle segment of each screen displays the button assignments. This works very well in practice, with a plethora of parameters controllable and viewable at the same time.

But then there’s more! Using the macro facility, each knob and related button (each button also has several trigger modes) can control eight user-assigned parameters at once, so you can set up your most-used performance parameters and tweak them out on the fly during live shows or when jamming in the studio.

You can store and name these macro setups too so that your favourite buttons’ macro setups can be applied to any of your custom patches. Macros can also control mod-matrix mod routes too (again, much like ‘control routes’ on the Alesis Andromeda – which give you a way to ‘interrupt’ the mod paths).

Talking of mod routes, there are 32 here and really, you can let your imagination run wild! Setting up mod routes is super-fast and can be done in and out of the Mod Matrix page (accessed by the Mod Matrix button). Simply hold any source (LFO1 for example) then hit your desired destination (filter cutoff for example), tweak the level and you’re set. You can modulate the excellent effects too (which is always something that impresses me), greatly increasing the Hydrasynth’s versatility.

The ‘module select’ area gives you fast and direct access to all the main modules that make up your sound. I like that you can instantly see what is being triggered by a keypress, (for example the envelopes and LFO buttons will light up if assigned). All familiar sound building blocks are nicely presented here including oscillators, envelopes, filters, amp, mixer, LFOs, noise and effects.

However, this is the Hydrasynth and it isn’t conventional in any way! Firstly, you have three oscillators per voice which include standard waves, plus wave-scanning (an intuitive type of wavetable synthesis where you can assign eight waves and scan through them using a dial/mod route).

Then within the ‘mutants’, you’ll also discover linear FM, plus unique types of pulse-width modulation. In addition, there are five (looping) envelopes per-voice, an amp module, two filter modules, five LFOs, reverb and delay modules, plus pre and post effects.

In essence, all you’d likely want in terms of sound design is here, directly accessible and mostly modulatable! And as powerful as this looks on paper, this is reflected in the sound too.

General sound quality is truly excellent (precise and crisp yet it can be warm and textured) whilst the resulting sounds can be anything from high quality ‘bread and butter’, to unique sounds that you’ve truly never heard before. Inject the ribbon controller, arpeggiator, macros, mod routes and of course the poly aftertouch (and very musical sounding effects/drive) and you’ll be churning out refreshing new sounds fast!

Admittedly, there is a shallow learning curve but that is to be expected with the level of complexity onboard. With deep synths like the Hydrasynth, it’s always advisable to draw mental maps of your sounds first, then go in (and I suggest reading the manual too), but if you’re into modular then the Hydra will be very fast for you to get to grips with due to its module-based layout.

Alternatively, to get exploring quickly, you can just hit the random button and shoot the breeze; sometimes results will be, shall we say, a bit off, but then gems will appear that can be great starting points or great sounds in themselves.

As a first new synth from a new company, the Hydra is hugely impressive all-round (and this is not an easy thing to achieve on the first throw)! Build quality, looks, features, sound – it has it all and at a price that is actually affordable too.

Let’s also not forget that there’s a beautiful rackmountable/desktop version too (with all the features but pads instead of keys). Congratulations to ASM on a brilliant machine!

MusicRadar verdict: An impressive first release. Looks and sounds great, invites exploration, built to last but not overpriced. What’s not to like?

"I recommend the ASM Hydrasynth to any synthesist, but especially anyone who loves to build patches from scratch. If that describes you, it offers powerful programming tools and a well-designed, intuitive interface."
Synth and Software

"Let's face it, if the Hydrasynth had a control for every parameter, few of us could afford one."
Sound on Sound