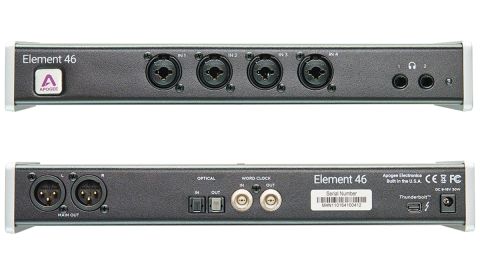 If you’re happy with software-controlled hardware, Apogee’s Element interfaces offer glorious audio quality, and the preamps are among the best-sounding available.

The Thunderbolt protocol is now well established as a go-to choice for audio recording and playback, and the battle between leading manufacturers of audio interfaces is escalating quickly.

To rival the likes of Universal Audio’s Apollo range, Focusrite’s Clarett units and MOTU’s 828X, Apogee returns with a new interface suite of its own. The Element Series of interfaces includes three separate models in the form of the Element 24, 46 and 88, with the numbers referring to the number of analogue inputs and outputs featured on each device. The subject of this review is the four-in, six-out Element 46 and as we’ll see, there’s plenty going on here which marks Apogee’s approach as separate from many of its competitors.

First up, let’s learn a little about what makes up an Element audio interfacing system. The main interface itself prioritises function over form by offering an extremely simple and rather plain-looking unit with no LED or LCD in sight. Don’t let the featureless look throw you though – the (optional) Remote Control unit might look like the more interesting piece of kit [see Apogee Remote Control], but that plain grey box plays host to the real action.

The real ace up Apogee’s sleeve is that the Element interfaces aren’t actually designed for physical interaction at all - instead, they’re designed to be put to one side on a surface in your studio, with their microphone connections (front-mounted for convenience) the only part you’ll get hands-on with during the recording process. Everything else is handled by software, with that aforementioned Remote Control providing extra hands-on interaction with the application should you wish.

The front panel provides four combination inputs for mic and instruments in the middle, and a pair of stereo 1/4" headphone outputs to the right-hand side. Round the back the minimalism continues. XLR main output ports are flanked by Optical (for ADAT/SMUX or SPDIF connections) and Word Clock In/Outs, while the power supply input and Thunderbolt connection port complete the line-up.

In terms of all the other parts of a recording session, such as setting Gain levels, enabling Phantom Power, inverting Phase or setting up headphone mixes, Apogee instead require you to download the Element Control software, which is available for Mac and iOS platforms.

Setting it up works like so: plug in the hardware and register it via the Apogee website. This prompts you to download the corresponding software package for your interface. The Element Control software offers a range of template starting points to help you configure how you want its GUI to look. With the full range of options on display, System and Device settings are on the left, controlling Clock Source, Sample Rate and other global preferences.

The Channel View section is at the top, where Input Type, Gain, Phantom Power, Phase Polarity Invert, Soft Limiting and Grouping (mono or stereo-linking) settings can be configured for each physical input, with ladder LEDs for each of these above, alongside those for software playback levels from your computer.

If you want to set up for a quick, basic recording, things needn’t become more complicated than this (and indeed there’s an ‘Essentials’ pop-up window version of the software offering a stripped-down configuration designed to ‘float’ next to your DAW software), but if you want more comprehensive control, further down, you can configure three Mixer windows as well as a dedicated FX Send mix, for assigning Channels to Faders, letting you configure Headphone and Monitor output mixes for recording sessions, and looping in monitor effects while tracking.

The Element software is beautifully configured, but if you want hardware control over your Element interface, Apogee Control is available (separately). This compact desktop remote is powered via USB, and its controls can be set up via the Element software. Eight buttons (1-4 and A-D) can control functions such as Input Levels, phantom power, talkback and many, many others, while the three buttons around the rotary at the bottom let you toggle between inputs, headphone setups and speaker controls. The wheel itself lets you dial in/out levels, and doubles as a button which is similarly configurable.

It’s impressive stuff, nicely designed and intuitive to use, especially if you’re a Logic Pro user, as audio input settings including Gain and Phantom Power on/off can be further controlled from each audio channel’s control strip. Apogee’s name is staked on its warm, clear preamps and AD/DA conversion and this reputation is more than upheld here; Element 46 sounds glorious, taking the best of the protocols offered by its top-of-the- range Symphony interface.

There are a couple of things about the Element series which aren’t perfect. It would be good to see a rack-mounting option for each of these interfaces as desktop space is - for most people - at more of a premium than rack space, and with the exception of plugging in microphones and instruments, this is a box designed to stay out of the way.

Also, you need to buy a Thunderbolt cable separately. Apogee is by no means alone in doing this, but we’re making it our mission to wag an accusatory finger at all manufacturers of interfaces at this price that don’t supply one. It’s the grown-up version of the Christmas present which requires unsupplied batteries.

Thereafter, though, there’s an awful lot to like here. While nearly all audio interfaces now provide software control over hardware, Element Control goes further than most, providing an essential front end to Apogee’s preamps and A/D conversion. Both of these are of the standard which has become known and admired, so if you’re after a Thunderbolt interface for your Mac and you’ve been scrutinising the market, a compelling new option is here to make your decision even harder.