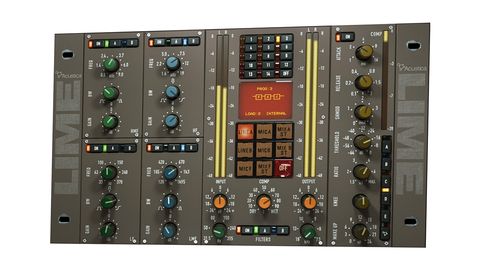 Acustica’s best yet, Lime sounds so good you’ll have trouble believing it’s not a physical channel strip - except for that lag...

They’ve been captured from a range of Neve console channel strips and outboard: the 8801, VR, 88R, 1073, V-Rack and 8051. Again, it comes as part of a bundle - Lime Crazy88 - that includes a zero-latency version and individual plugins for its three component modules: Lime Pre, Lime Bus and Lime EQ.

Like that of its stablemate, Lime’s chunky, photorealistic fascia is a beautiful thing to behold. The left-hand side houses a four-band EQ, the central panel is home to the Control, Preamp and Filter sections, and a Compressor occupies the right. This layout doesn’t represent the actual signal flow, however, which is user-adjustable.

Each EQ band is independently switchable between emulations of the Neve VR and 88R, the two differing significantly in frequency ranges, variable Q behaviour and sound. The High and Low bands are continuously sweepable from broad peak through narrow peak to shelving response, while the High Mid and Low Mid bands feature more conventional Q controls, ranging from broad to narrow.

A selection of eight preamps (11 in the Lime Pre plugin) from the Neve 88R, 8801 VR and 1073 is available in the Preamp section. These draw on their various line, mic, EQ and compressor paths, individually and in combination, for a variety of subtle but effective tonal colours and task-orientated configurations. The Preamp section’s three knobs control Input and Output levels, and Compressor Dry/Wet balance.

Above, in the Control section, are buttons for switching between 14 diverse serial and parallel routing schemes (some utilising the external sidechain); and in the Filter section below, high- and low-pass filters each offer A and B modes, based on the Neve VR and 88R.

The price of power

As anyone with any experience of Acustica’s other plugins will know, latency is part and parcel of the Acqua convolution technology behind them, with a very noticeable delay between twisting a knob or pressing a button and anything actually happening.

Once you’ve got your parameters finalised, this may well feel like a small price to pay for such exceptional quality of end result, but when you’re in the flow - particularly flipping between Lime and other plugins that don’t suffer from the same issue - it’s pretty annoying. You’d think the included zero-latency version (LimeZL) would help, but that just alleviates audio input latency, not control input lag.

We also really don’t like the use of continuous but ‘snapping’ knobs for the Compressor Attack, Release and Ratio, where stepped ones or even buttons would be more appropriate. Such shonky UX is disappointing in such an otherwise-sexy GUI.

The Compressor sports a choice of five models, sampling the VR, 88R, V-Rack and two 8051 Surround Compressors (a regular model and Acustica’s own modified one), and switched between using the stack of buttons to the right. They vary in terms of Ratio, Attack and Release ranges, and general sound quality, but C mode - the aforementioned 8051 - almost brings a tear to the eye with its staggeringly ‘analogue’ musicality and smoothness. Astonishing.

As we also found with Sand, the ability to shape the compression attack curve with the SHmod knob is incredibly useful, while the option to kick up the oversampling with the CPU-devouring Insane mode is welcome.

Predictably, Lime is earthier and more colourful than the comparatively neutral Sand, genuinely capturing that organic Neve sound and spirit to an extent rarely heard in software.

The EQs and compressors are absolutely beautiful, the routing options give plenty of flexibility, and having access to the individual modules as separate plugins is great. Yes, the lag (see The price of power) is unarguably a turn-off, but the end result is more than good enough to make it worth enduring. If the idea of a comprehensive Neve channel strip right within your DAW appeals, you simply have to have Lime in your life.