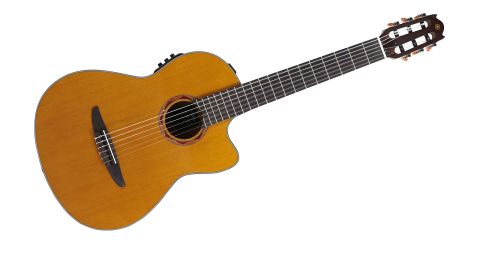 When Yamaha launched the NX Series in 2009, it was typically considered: two cutaway models in a range of price-ascending series - 700, 900, 1200 and 2000. The more classical-style NCX models, shape-wise, are based on Yamaha's cutaway, full-depth classical guitars. New for 2014 is NCX (reviewed here) and NTX700C: not only the most cost-effective NXs yet, but the only ones with solid cedar tops. Cheap and cheerful? Think again.

The guitar is flawless. The cedar top is clearly visible under an amber-toned gloss finish. Top bracing is uses six spruce fan braces and a thin bridge plate. But this guitar - nor the NX range in general - isn't designed to fill a concert hall, unamplified.

Yes, there's more than enough volume for small acoustic ensembles, but this really is the definition of a modern electro-acoustic 'crossover' or 'hybrid' nylon- string. The neck is glued into a steel-string like block, and features a truss rod - a no-no in the classical world.

But there's still plenty of the nylon-string's heritage on view, not least the subtle black binding and black/white purfling; and instead of a multi-inlaid wooden soundhole rosette we have inlaid mahogany and padauk with four abalone 'stringers'. It's the classical standard 650mm scale length, just a shade over Fender's 648mm.

So, while that's nothing to worry about, the neck width, compared to a steel-string, is big. The NCX follows the wider classic protocol - 52mm at the nut and 62mm at the 12th fret.

At the heart of the guitar is the System 61 'two-way' pickup and preamp system, developed specially for the NX range. Unlike the majority of modern electro nylons, instead of the ubiquitous under-saddle piezo strip, we have two ART contact pickups placed on the bass and treble sides, underneath the bridge.

However, unlike a standard contact pickup, which, according to Yamaha, can pick up too much body sound - resulting in feedback - the two ART pickups "utilise a multilayer damper in order to absorb excessive vibrations and control feedback."

They plug into a side-mounted preamp, and each has its own rotary level control. Their summed output then passes to a three-band slider EQ (bass, mid and treble), and finally a rotary master volume.

We also get a tuner, but it doesn't mute the output when engaged. A separate battery compartment is sited higher on the shoulder, just before the heel - and, illustrating its stage intent, the guitar has a second strap button on the heel base.

Yamaha's highly consistent build and quality control means that whether you have a start-up Chinese-made NX model, like either here, or one of the pro-only Japanese-made 2000 series at around six times the price, the feel is virtually identical. Along with our review model, we have a well-gigged 2009 NCX2000R prototype and a brand-new 2013 NCX900FM to compare.

It really is a little unnerving: from the setup through to the overall feel, and especially the neck profile, it's hard to tell the three NCXs apart. Acoustically, we're mixing things up a little more with the cedar/laminated nato of the 700, compared with the Englemann spruce/ laminated flame maple of the 900, and the all-solid ARE- treated Hokkaido spruce top/ solid rosewood back and sides of the NCX2000R.

But our 700C acquits itself admirably. The cedar brings a more muted, slightly compressed response, which is less 'explosive' than either of the spruce-topped models, but response from low to high is remarkably well balanced - and for recording, general fingerstyle and especially more intimate Latin/bossa styles, it seems a perfect match.

The System 61 pickup/preamp is very well conceived for the majority of live performance needs (although a tuner mute would help), and this is purpose-designed to be plugged in. But just as one of the goals of the classical acoustic maker is to balance the bass response with the treble response, plugged in we become the luthier thanks to the individual level controls of the treble and bass pickups.

So, keeping the EQs in their central notched 'flat' positions and plugging in to both our AER Compact Classic and a Line 6 StageSource, you can balance the bass and treble pickups via the dual rotary controls, adjusting the overall output level as you go.

The cedar-topped guitar retains its unplugged traits. There's a subtly muted but intimate balance, and quite a dry-sounding separation that suits classical styles, jazzier voicings or indeed picked parts - don't be afraid to use a plectrum!

The guitar records well DI'd, and with a little additional compression and ambience sit nicely with a small ensemble backing. You have to watch the 'squeak' on the wound strings and, of course, the level you can achieve before feedback depends on numerous factors - this is still an acoustic guitar. The supplied soundhole bung does help, though.

In comparison with every other electro nylon-string we could lay our hands on, including more expensive Yamaha NXs, this guitar really doesn't disappoint. The cedar certainly brings a different response compared to our spruce-topped nylons, and one we'd like to explore more.

Above all, the guitar doesn't look, feel or sound cheap - which is a testament to Yamaha's design, production and a really good 'all-round' pickup system. Yes, there are systems that might capture a more realistic voice, but they rarely work well amplified at volume; conversely, an under-saddle piezo should give you better feedback resistance, but in our comparisons didn't match the sounds and response we're hearing here.

Of course, if you just want to play acoustically, you have a huge choice, but that's not solely what the NX is about. While it has reasonable acoustic projection, it's when amplified that it really comes into its own.

If you're yet to put a toe into the world of the nylon-string, and intend to use one live, this is a seriously good, and highly affordable, place to start.