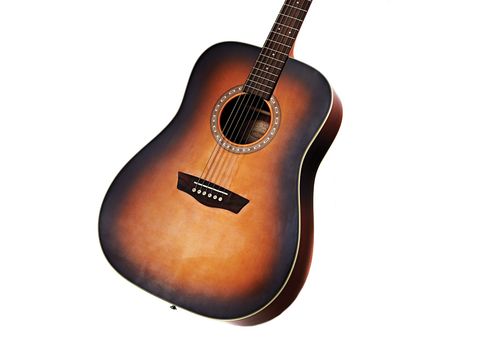 When it comes to big performance on a tight budget, this workhorse from the Windy City comes up trumps.

We are professional reviewers. We must not allow ourselves to be blinded by superficial factors, such as the glorious tobacco finish that evokes pre-war juke-joints, or psychological ones, like the stamp of renowned Chicago gear god Washburn on the headstock.

We must assess this guitar on its nuts-and-bolts performance. Also, we must stop drooling.

We've already mentioned the stunning cosmetics - which give those familiar raw materials of spruce and mahogany a much-needed twist of the exotic - but more tangible is the WD7S's knockout performance on the lap.

Clocking 120mm, the Washburn never feels cumbersome, while the neck has an especially welcoming and easily gripped profile that will support developing players as they hone their chops. It feels natural when you dig in with a pick, but the nicely compact 54mm string spacing at the bridge means that while the guitar is more geared to strumming, twisty fingerstyle isn't out of the question either.

Let our ears be the judge: the WD7S is big, bold and boomy, like the sound a 'classic' dreadnought makes in your head. The volume on this thing is unreal - if you're competing with a 000-toting mate around the Reading campfire, you'll blow him out of the water - but it's not just about uncultured caveman grunt.

When you're strumming with a pick, the sound is crystal and authoritative without being abrasive, and when you apply fingers, the output softens up in convincing fashion, bringing in a really mellow warmth that revitalises riffs and implies this model is pretty expensive.

It's not, though. At £179, the WD7S represents a rung on the gear ladder that's within reach of a paperboy, yet at the same time it's classy enough to stick around in your gigbag for years to come.