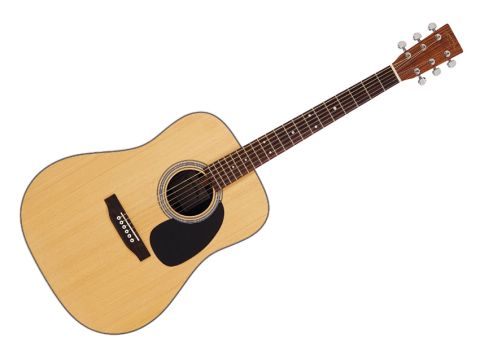 A superbly well-built dreadnought, bursting with tone and representing excellent value for money.

Production of Sigma Guitars, the affordable range launched by Martin in the '70s to keep Japanese competitors at bay, ceased in back 2007.

But the brand was recently purchased from Martin by AMI, a German-based distributor of high-end acoustic and classical guitars, and has since been re-launched. Completing something of a complicated circle, Martin Guitars' UK distributor, Westside Distribution, is now importing Sigma Guitars into the UK.

"While not clamorous or boisterous, the DR-28 is full, well-rounded and instantly likeable."

The Sigma catalogue has four ranges; the 1-series, the all-mahogany 15-series, plus the Standard and Vintage series. The Standard series is by far the largest, including 000-shaped guitars, 12-strings and electro cutaway models. Sitting in the middle is the DR-28 ('D' for dreadnought, 'R' for rosewood), which features a fine-looking bookmatched solid Sitka spruce top and laminate Indian rosewood back and sides.

The soundboard has a tight, pronounced and fairly straight grain and is home to a simple black pickguard. The DR-28's decorative cupboard is quite bare and what enhancements there are, are simple and understated.

The guitar's top is edged with uncomplicated triple-strip coachlining while both the top and bottom of the guitar are bound with humble white binding, which matches the heel cap. A three-ring soundhole rosette is the DR-28's only other decorative feature, although a parquetry stripe divides the two-piece back.

The two-piece, slim 'C' profile, mahogany neck is finished in matt satin and home to a single adjustable truss rod, access to which is just inside the soundhole at the foot of the rosewood fingerboard. Chrome enclosed Grover tuners are fitted to a Martin-shaped headstock upon which a transfer of the Sigma logo sits.

In terms of its dimensions, the DR-28 is an exact replica of our house Martin D-18. In fact, from the whole look, feel and presentation of the DR-28 is unmistakably Martin-like, which is unsurprising bearing in mind the brand's history. After close inspection, we were impressed by the build quality offered here. With a SRP less than £350, there's very little to justifiably find fault with. The high-gloss finish appears perhaps a little thick in places, but that's about it - it certainly scores well for craftsmanship and presentation.

If the DR-28's appearance can be accused of being simple, the tone it produces is most definitely not. Punching way above its weight, the DR-28 offers a surprisingly rich and complex timbre complete with ample overtones and good sustain.

While not clamorous or boisterous, the DR-28 is full, well-rounded and instantly likeable. The top end of the register is bright too, with a clear, vibrant rasp.

When pitted against a range of similar and more expensive dreadnoughts, the DR-28 performs remarkably well. Tone is obviously a subjective issue but we'd suggest that you'd struggle to find a 'better sounding' dreadnought at this price point.

With the DR-28, Sigma has raised the bar of what can be expected from a solid-topped laminate back and sides guitar and if it becomes widely available, this model could just become one of the guitars of 2012.

If this reviewer was in the market for a dreadnought then he would purchase the DR-28 without hesitation.